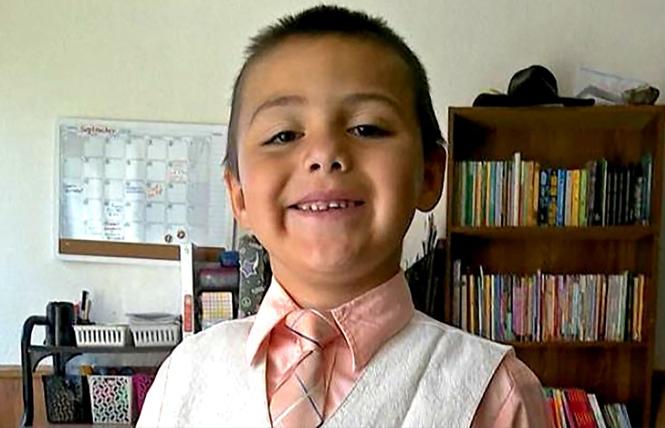 After the death of 10-year-old Anthony Avalos, who reportedly came out as gay shortly before he died, the Los Angeles County Department of Children and Family Services will undergo an audit. The audit will review the department's protections for LGBT youth, according to authorities.

Anthony's mother, Heather Barron, and her boyfriend, Kareem Leiva, have both been charged with the death and torture of the boy. Anthony died June 21 after being found unresponsive in the family's Lancaster home the day before.

At least 13 calls were received by the DCFS since 2013 from school administrators, a teacher, a counselor, and family members that reported signs of child abuse against Anthony, according to the Los Angeles Times.

In a bipartisan vote August 8, the California Legislative Audit Committee approved a request for a state auditor to review the department. Gay state Senator Ricardo Lara (D-Bell Gardens), Senator Scott Wilk (R-Santa Clarita), and Assemblyman Tom Lackey (R-Palmdale) requested the audit after DCFS failed to remove Anthony from his mother and her boyfriend.

"It has been six years since the California state auditor reviewed child safety in Los Angeles, and I hope that county leadership will welcome this as an opportunity to improve its practices, particularly when it comes to protecting LGBT youth who are more likely to face abuse and rejection by their families," Lara, who is also vice chair of the Legislative LGBT Caucus, said in a news release. (Lara is also a candidate for state insurance commissioner this November.)

Brandon Nichols, deputy director of DCFS, told the Times a week after Anthony's death that the boy had revealed "he liked boys," and that homophobia was being investigated as a possible motivation in his death.

In an interview with the Bay Area Reporter, Assemblyman Al Muratsuchi (D-Los Angeles), chair of the audit committee, said the audit will determine if DCFS has adequate practices to identify and protect LGBTQ youth. As well, the audit will review if the department's child abuse investigations, assessments, and wellness checks are timely, accurate, and thorough.

"The audit will examine how the LA County's Department of Children and Family Services is handling the particular needs and concerns of the LGBT youth community," Muratsuchi said. "The overall policies and procedures will be reviewed to identify whether there are shortcomings with the existing policies and processes and to assess and recommend solutions of reform."

The assemblyman said the audit was sparked, in part, by another similar case of fatal child abuse in California. In 2014, the parents of Gabriel Fernandez, 8, from Palmdale, were convicted of his murder after prosecutors presented evidence that the couple believed he was gay.

"In both cases there was evidence of child abuse triggered by or relating to issues of sexual orientation or gender identity and sexual expression," Muratsuchi said. "We need to make sure that LA County is doing its job to protect these kids."

"We owe it to them - and to every child in Los Angeles County - to do everything in our power to make sure LGBTQ youth are protected from abuse and rejection," said EQCA Executive Director Rick Zbur. "Equality California is deeply grateful to Senators Lara and Wilk and to Assemblymember Tom Lackey for leading this effort and to the committee members for approving this critical examination of the county's efforts to protect our children."

The Los Angeles County District Attorney's office claims Anthony was tortured for five days leading up to his death, according to the Times. Barron and Leiva's arrangement is scheduled for October. The pair is being held in custody on $2 million bail.

DCFS declined to provide a comment to the Bay Area Reporter for this story.

LGBT Bar Association's pledge to stop discrimination
In a stand against bigotry, the LGBT Bar Association announced a campaign this month that encourages attorneys across the country to refuse pro bono services for anti-LGBT legal groups.

The online campaign "Commit to Inclusion," asks those who sign the pledge to "commit to inclusion by ensuring that our personal pro bono and volunteer capacity and personal financial resources will not be used to support the work of [Alliance Defending Freedom] and Liberty Counsel."

The Liberty Counsel and ADF are litigation organizations, with offices around the country that have opposed LGBT equality on the basis of religious freedom. In the past ADF has represented Proposition 8 supporters, the statewide ballot measure that outlawed same-sex marriage in California, but was later overturned by the U.S. Supreme Court. The Liberty Counsel, in 2003, challenged New York City's effort to expand Harvey Milk High School, a public school for LGBTQ youth.

In a promotional video on the inclusion campaign's website, Cathy Sakimura, family law director with the National Center for Lesbian Rights, said the anti-LGBT groups have a "long-term goal to chip away at LGBT rights," and said the groups' efforts, "run the gamut on attacks on individual families to entire categories of LGBT people."

In response to the campaign, the Liberty Counsel defended people who believe in "natural" marriage.

"It is shameful that an association of lawyers wants to shut the courthouse doors to millions of Americans who believe in natural marriage and who oppose the anti-religious freedom agenda of some LGBT activists," said Mat Staver, founder and chairman of Liberty Counsel, in a news release. "The courthouse should be open to all, no matter your beliefs. The LGBT Bar Association is upset because Liberty Counsel and ADF are winning many important cases all the way up to the U.S. Supreme Court. They might as well extend their so-called boycott to the justices on the high court. Their boycott is that ridiculous."

Bill seeks to add LGBT-related questions to 2030 census
Senators Kamala Harris (D-California) and Tom Carper (D-Delaware) introduced a bill July 31 that would require the U.S. Census Bureau to include LGBT identity questions on the 2030 census. The Census Equality Act would add questions related to sexual orientation and gender identity to the census for the first time.

"The spirit of the census is that no one should go uncounted and no one should be invisible," said Harris in a news release. "We must expand data collections efforts to ensure the LGBTQ community is not only seen, but fully accounted for in terms of government resources provided. This information can also provide us with better tools to enforce civil rights protections for a community that is too often discriminated against."

According to KQED, there were more than 75 members of Congress and multiple federal agencies in 2016 that requested census data relating to the LGBT population, including the Department of Housing and Urban Development.

It reports that in November 2016, the Justice Department requested the census bureau to consider including questions related to sexual identity and orientation to the American Community Survey, which the bureau conducts annually with about 3 million households, according to the census website.

However, since the Trump administration took over, the Justice Department rescinded its request to consider LGBT related questions, in a letter posted on Carper's website.

The Census Equality Act is supported by the National Center for Lesbian Rights, American Civil Liberties Union, Leadership Conference on Civil and Human Rights, and many more LGBT organizations.