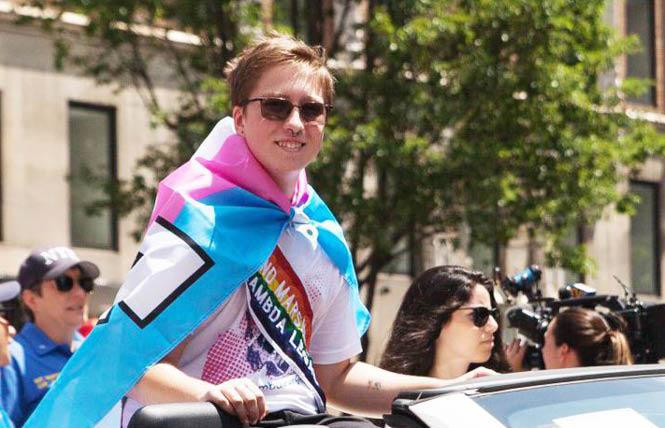 A transgender teenager in Florida will be able to use the men's restroom during his senior year of high school after a federal court ruling.

"I am so grateful that I can just focus on being a regular kid at school. I have so many other things on my mind, like getting into my top college choice, so I don't want to have to worry about whether I can use the boy's restroom," said Adams in a Lambda Legal Defense and Education Fund news release. Lambda Legal represented Adams in the case.

On behalf of Adams, Lambda Legal sued the St. Johns County School Board in June 2017 after it required him to use the girl's bathroom citing a district policy. Lambda Legal argued that the school district's policy was unconstitutional because it discriminates based on sex; a violation of the equal protection clause and education amendments act.

"For St. John's County School Board to have a policy that says Drew is somehow less deserving of the same safe, respectful learning environment as any other child because he is transgender is discriminatory," said Paul D. Castillo, senior attorney and students' rights strategist at Lambda Legal.

Corrigan's ruling states that during trial "Adams testified: 'I am a boy and I know that with every fiber of my being.' However, when the principal of Nease was asked whether she considered Adams to be a boy, she replied, 'I do not.'"

The judge ruled that the case was about whether or not Adams was a boy.

"Drew Adams says he is a boy and has undergone extensive surgery to conform his body to his gender identity," the ruling states. "Other than at his school, Adams uses the men's bathroom wherever he goes..."

The ruling continues, "Drew Adams is just like every other student at Nease High School, a teenager coming of age in a complicated, uncertain, and changing world. When it comes to his use of the bathroom, the law requires that he be treated like any other boy."

The school district issued a statement to the Bay Area Reporter saying it's disappointed with the ruling.

"We believed our policy was legal and one which struck a balance of the rights of all students," wrote Superintendent Tim Forson in an email. "We are disappointed with the decision, but respect the legal process and will abide by the final outcome."

Adams began living openly as a boy in 2015 and used the boy's restroom his freshman year of high school without any issues, according to the Lambda Legal news release. But after an anonymous complaint he was told he could only use gender-neutral restrooms, which separated him from his peers and treated him as unfit to share communal facilities with others.

Adams will start school this month as a senior.

In a similar case, transgender former student Gavin Grimm is waiting to hear from the 4th U.S. Circuit Court of Appeals on whether it will hear his case. Grimm, a former high school student in Virginia, sued his school district after it refused to allow him to use the boy's restroom while he was a student. Grimm has since graduated from high school and is now living in Berkeley and is represented by the American Civil Liberties Union.

Federal judge tosses lawsuit targeting transgender youth
In another win for the transgender community, a federal judge in Portland dismissed a lawsuit July 24 that attempted to dismantle protections for transgender students in rural Dallas, Oregon. The suit, filed by Parents for Privacy, which included parents of current and former Dallas High School students, tried to overturn the Dallas School District's Student Safety Plan that allows students to use the restrooms and locker rooms that match their gender identity.

The parents of some students at a high school in the district said in the lawsuit that the policy caused their children, "embarrassment, humiliation, anxiety, intimidation, fear, apprehension, and stress."

U.S. District Judge Marco Hernandez ruled that allowing transgender students to use the restroom or locker room of their choice doesn't violate the privacy rights of other students.

"It sends a clear message to school districts that transgender students deserve the same access to a safe and affirming education as every other student," Brook Shelley, board chair at Basic Rights Oregon, said in a news release. "It also affirms the Dallas School District, which took necessary and legally required steps to affirm a transgender student in their school."

District Superintendent Michelle Johnstone told the B.A.R. in an email "Our goal has been, and will continue to be, focused on accommodating the privacy for all students. We appreciate the collective work of all involved to ensure we have the best policy and plan in place to accomplish our goal."

In Oregon, state laws prohibit discrimination in education and public places based on gender identity. In 2016, the Oregon Department of Education wrote guidelines for Oregon public schools protecting transgender students.

According to a news release sent out by the ACLU, Basic Rights Oregon is fighting a similar lawsuit recently filed in Sutherlin, Oregon.

Parents for Privacy did not respond to a request for comment from the B.A.R. before this column was posted.

The 66-page guide, called "Coming Out: Living Authentically as LGBTQ Asian and Pacific Islander Americans," was released July 27, according to the HRC website.

The resource book explores the complexities and uniqueness of the coming out experience for LGBTQ API Americans and acts as an educational guide.

"There is no universal coming out experience that all LGBTQ API Americans share, but many report similar challenges during the process," Mark Lee, HRC Foundation senior writer and co-author of the resource, said in a news release. "Some raised in religious communities must reconcile themselves with traditions and teachings that may condemn LGBTQ identities. Language differences can also make it difficult to find relevant or relatable resources and support, and a lack of LGBTQ API representation in media, entertainment and politics perpetuates invisibility. This resource serves as a valuable conversation starter for LGBTQ APIs, their families and their communities."

Chapters in the resource include, "Religion and Faith," "Family Acceptance," "Reactions Family Members May Have," and "LGBTQ API History and Culture."

The resource is available to view or for download online at http://www.hrc.org/resources/coming-out-living-authentically-as-lgbtq-asian-and-pacific-islander-america.