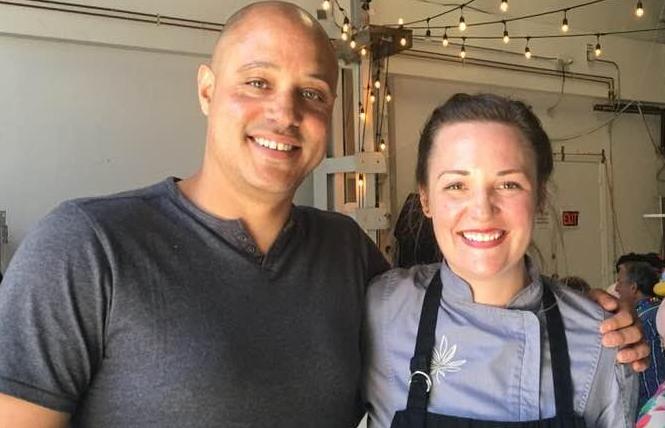 Despite the 2016 legalization of recreational cannabis in California, the state still bans the use of pot in, or with, food served in restaurants or other public spaces.

Some people are working to change that.

Voila: the Cannaisseur Series is a twice-monthly underground pop-up where you can enjoy a gourmet meal with seasonal California ingredients paired with intermezzos of cannabis flowers, edibles, and extracts offered by chef Coreen Carroll and her husband, cannabis entrepreneur Ryan Bush.

While the menus vary, the events always begin with small infused bites served as hors d'oeuvres, followed by four-course meals paired with flowers provided by local cultivators. Throughout the event, the chef and the cannabis producers explain the passion and process that go into what they serve.

At the sumptuous brunch I attended in June for LGBT Pride, four drag queens entertained during, and after, the meal and we each went home with a gift bag. The brunch began with delicious coffee mocktails made with Somatik's cannabis-infused coffee and THC-infused beet quail eggs with pea shoot pesto. A salad topped with infused olive oil preceded the main course, cabernet braised buffalo short ribs with gorgonzola polenta. Dessert was a sweet garbanzo crepe with fresh fig jam and Ghirardelli chocolate. The exquisite presentation and fresh ingredients in each course reminded me of Berkeley's Chez Panisse or San Francisco's Zuni Cafe.

The parties, which cost $175 per person paid in advance, have sold out each time they've been held, Carroll said in a telephone interview with the Bay Area Reporter. She advised people who are interested in attending to check out the website and add their name to the mailing list.

The couple came to San Francisco from Florida seven years ago "to get involved in the cannabis industry," said Carroll. Bush had previously operated a digital marketing business while Carroll worked in medical device regulation.

But when they arrived in San Francisco, Carroll wanted to fulfill her longtime interest in cooking and enrolled in the San Francisco Cooking School. Bush enrolled in Oaksterdam University to learn about the cannabis industry. The couple soon launched an edibles company, Madame Munchie, which produced infused macarons - French-style macaroons - which were quickly picked up by dozens of dispensaries.

"I found myself baking 3,000 cookies a day," she said. The company is still operated by the couple's former business partners.

In the meantime, Bush began working as director of business development at a cannabis start up, Meadow, and Carroll itched to begin a catering business. Soon, the couple were cooking full course meals at home, which they served to a dozen people at a time, through the dining website, Eat With.

Before long, their ambitions outgrew their tiny San Francisco apartment, and the couple decided to find a larger commercial space where they could serve a sit down meal for 40.

The couple attended a number of pop-up food events, where chefs often cooked with ingredients - such as foie gras - that were banned in retail commercial kitchens, said Carroll, who added, "We said to ourselves, 'why don't we do the same with cannabis?'"

On May 3, 2015, the cannaisseur series was born. From the very first event, the parties sold out in advance without any advertising beyond their mailing list and circle of Facebook friends. Events are held in private locations, and disclosed to reserved guests the day before the event.

"We thought we were onto something people really wanted," said Bush.

Several, she said, come to each party and a handful of others come frequently. "I think the fact that we sell out shortly after each event is announced says people are enjoying themselves," she added.

The couple plan to continue throwing parties at least twice a month, depending on what other commitments they have. Nothing has been scheduled yet for this month, because Carroll and Bush will have a booth at the upcoming Outside Lands Music and Art Festival, in Golden Gate Park August 9-10, which will have a section of cannabis booths, although consumption at the event is barred.

At the recent cannaisseur brunch, two LGBT-owned startups took part in the event.

Schroeder, who brought his father as a guest to the party, said the events "are a unique opportunity to mix with all kinds of people who love food," he said. He brought his dad, a local psychotherapist, "because he's the person who originally introduced me" to cannabis.

The drag show at the brunch "was a great addition, especially because the performers joined us for the meal," he added.

"I had such a blast at the party," said Brooks. "I loved starting the day with a group of people in a wonderful mood."

"San Francisco is lucky to have so many talented cannabis entrepreneurs who are ready, willing, and able to provide" similar celebrations when the legal restrictions are removed, she said.

Carroll foresees the twice-monthly meals to continue for the next couple of years. Then, depending on what the law allows, "who knows?" she said.

"We hope this sort of thing will become more mainstream," she said.

In November, Carroll's first book, "Edibles: Small Bites for the Modern Cannabis Kitchen" will be published by Chronicle Books.

The book will include 30 recipes, both savory and sweet, with an emphasis on low dose recipes.

"It's for the soccer mom," Carroll said.