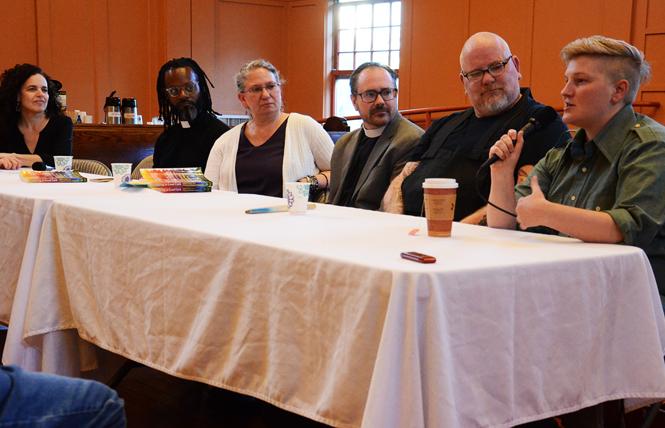 Queer religious leaders want to be visible and heard in their communities and they need others to come out to take religion back from the radical right.

That was the message delivered by five queer clergy and lay leaders who spoke recently about religion and LGBTs at Congregation Sha'ar Zahav.

"We have to take back religion from the religious right and own it for ourselves," said the Reverend Cameron Partridge, Ph.D., rector at St. Aidan's Episcopal Church in San Francisco.

"In my tradition Jesus was really political," he said. "Separation of church and state is a government thing, it's not an internal thing. There is no separation of my faith and my politics.

"If we are not speaking up," he said, "then we are ceding it to the other side."

Speakers said that visibility of queer clergy was very important.

"It's really important that those of us who hold faith as an important part of our life live our life out loud as a clergy person, as a spiritual person, as a faithful person, as we do as a queer person," said Partridge.

There are many faith leaders who are LGBT, but they are often "invisible holders of the knowledge," said Zen Buddhist priest Daigan Gaither.

The faith leaders participated in the panel, which was led by out Sha'ar Zahav Rabbi Mychal Copeland, June 14.

Copeland, along with panelist Rabbi D'vorah Rose, are co-editors of "Struggling in Good Faith: LGBTQI Inclusion from 13 American Religious Perspectives."

The religious leaders talked about the pain of unaccepting churches and the joy of churches that embrace LGBT congregants; the need for visible LGBT clergy in all faiths and denominations; and religion's role in everyday life.

A faithful struggle
Some of the clergy and lay leaders' experiences were painful - to the point of having to leave their family to protect themselves - while others held scars of memories of religion rejecting LGBT people.

"We understand that suffering and struggling is actually a part of our experience of being a person," said Gaither about the Buddhist faith. "We have had to struggle to come out to understand ourselves as queer people, but then, even more so, to stay faithful to something, to stay believers in something."

Addie Liechty, a queer Mennonite lay leader, said some in their denomination question whether they should remain a part of the church.

Survival was what drove Gaither to leave his ultra-conservative fundamentalist family when he discovered he was gay. They wanted to send him to conversion therapy.

"Growing up as a sissy in Texas, there's not really a place to hide," said Gaither, who found his way to San Francisco and eventually to the Zen Center.

"There was lots of stuff for me to unpack when I first landed at the San Francisco Zen Center," he said. "Buddhism is about embodiment. How you live in your body. How do you stay connected to your life in the body you have?"

Newells didn't have to unpack his issues being raised in the black churches of the East Bay, in his mind it's the churches that need to get real.

After becoming executive director of the AIDS Project of the East Bay he realized it was "the first job I had that I could be as black as I wanted to be and as gay as I wanted to be," he said.

An example of his inability to be a gay black minister happened in 2016. A fire that displaced his staff and clients for around 14 months struck his HIV/AIDS organization.

The Baptist congregation's response "was a little bit questionable to me for a church that professes to be progressive," he said. "They must not remember that I'm gay or I'm not gay enough for the congregation."

"So, that year I decided that I would be really, really gay at Pride. I wore my rainbow bikini and wings to Pride and nobody said anything to me," Newells said.

However, congregants said something to his family members and his pastor, who called him to have lunch for the very first time in his life.

"It was what I needed to do to challenge folks who think they are progressive when they need to be really honest," he said he told the minister when asked if he thought his actions through. "[The] black church and [the black community in] general have not dealt with LGBTQI issues because in large part many of them still can't deal with women's issues."

Different experiences
These experiences were the opposite of Partridge's, who is a transgender man.

Episcopal religious leaders embraced him when he came out. The church leaders asked him to have patience with them as they figured out how transgender leaders and followers could find their place in the church.

The Episcopal Church was one of the few denominations that were having a constructive and open dialogue about gender and sexuality during the early 2000s when Partridge came out, he told the audience.

Yet, despite the ongoing discussion within the church, being transgender wasn't on the "radar of our conversations" at the time, he said.

"It was a fairly terrifying experience to kind of come out at that time and in that context," the father of two young children said, adding, "I had quite a lot of support."

Since then the church has changed its cannons to embrace transgender leaders and members and continues to seek ways to improve accepting gender-nonconforming congregants, he said.

"This has been a long journey," he said. "We're not there yet, but we have come quite a long way, and I'm pretty proud of how far we've come. I feel really fortunate."

The Mennonite Church is allowing congregations to decide for themselves how to handle LGBT issues, which caused a rift in the Mennonite Church USA, said Liechty. Thousands of conservative Mennonites have left the church's ranks. Membership was once around 120,000 and is now around 75,000, "because there wasn't a hard-enough stance on LGBTQ people," they said.

Panelists agreed that San Francisco is unique with the number of welcoming places of worship and religious leadership, but with that uniqueness comes responsibility to push for acceptance.

San Francisco's Mennonite church, which holds services in Sha'ar Zahav's chapel, is a haven for Liechty. Its pastor is an LGBT ally.

"It's a space where I sit and forget that I'm LGBTQ because it's so integrated," said Liechty.

In stark contrast, Newells described an incident a couple of months ago at an Alabama church where the entire congregation started damning some young men to hell when they attempted to lead a discussion about HIV/AIDS.

The incident reminded him about his HIV-positive friends in southern Africa whose preacher had them bring their medications to the front of the church, where he "threw them on the ground and stomped on their meds," he said.

"Being liberal California, I can be out and push envelopes," he said. "It's my responsibility to do that because there are lots of folks that cannot for [their] safety" or who don't want to leave their families and place of worship for a more accepting congregation.

Partridge added, "We need to be doing that work and it's hard work."

Others see the Bay Area's communities of faith as a model for their communities to aspire.

"What is being done here is just really important for other people to see what is possible," said Rose, who also travels around the U.S. and in other countries.

Copeland and Rose noted how the Jewish tradition to reexamine and interpret the Torah could be used to push for "openness" and a "much broader exploration of what is Jewish life," said Rose.

"I think that Judaism has done a really good job around some of the areas around LGBTQI concerns," Rose said. "I think that there is some really good modeling that can be used, and is being used."