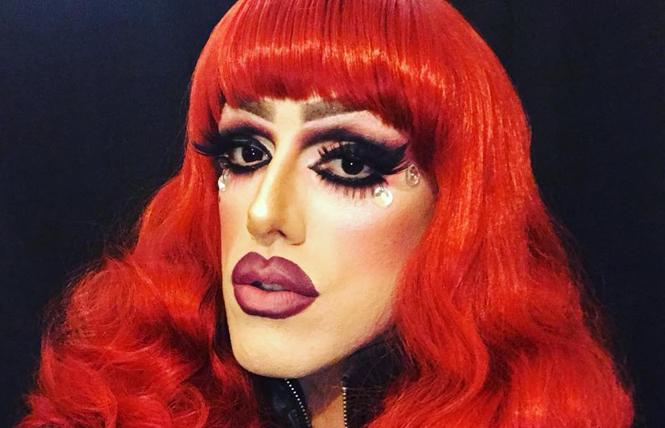 A local drag queen was allegedly robbed at gunpoint in the Castro July 5.

Carnie Asada, who is also known as Doran Rivera, described the incident on his Facebook page. He said that he was walking home on 15th Street between Beaver and Henry streets around 12:45 a.m. last Thursday. Rivera was not dressed in drag at the time of the robbery.

Two men then approached him once he reached Noe Street. One of the suspects came out from behind a tree with a gun in his hand, the other emerged from a hidden entryway on the street. The suspects then allegedly stole Rivera's wallet, cellphone, and bag and fled toward Beaver Street where they were picked up by a vehicle.

"This was something that was planned for the night, and I'm sure they have done this here before," read a July 7 Facebook post on Asada's page.

After he was robbed, Rivera ran to Lookout, a gay bar located at 3600 16th Street.

"I ran to Lookout, and my fam there helped to report the robber to the police and get me safely home. I'm not okay. This happened on a well lit and monitored block on 15th. We are not safe!" Rivera, 32, wrote on Facebook a few hours after the incident.

He was not injured.

San Francisco police confirmed a report was filed for the incident. The SFPD daily log identifies only one of the suspects as a black male 25-30 years old.

This is the second reported incident involving a drag queen in recent weeks. SFPD are currently investigating an alleged attack against Tim Tait, 40, whose drag name is Ginger Snap, as a possible hate crime. Tait was leaving the Eagle Tavern June 9 when he was allegedly attacked, leaving him with two black eyes, a gash on his forehead, a broken front tooth, and other cuts and bruises.

Tait could not recall any details of his attacker and filed a police report about a week and a half after the incident.

Police had no new information on Tait's case.

Other incidents
In Castro business-related crime, the front windows of Rossi's Delicatessen, 426 Castro Street, were broken June 24. According to the deli's owner, Isam Dougham, security footage shows a man using heat from a small blowtorch to break the glass of three of his four front windows around 5 a.m. Because the windows are made of laminated glass, they cracked, but did not shatter, and the suspect was prevented from entering the store.

After the B.A.R. spoke with Dougham, he had new windows installed Friday, July 6, but three days later, on Monday, July 9, one of them was broken.

"This is three times in four months," he said.

Dougham has not watched the surveillance footage and does not have any information about how the latest window was broken, but he said he is not going to call the police this time.

"They are not going to do anything," he said.

Dougham, who has owned the deli for more than 40 years, said a similar incident happened three months ago when a man drove his car into the storefront, breaking all four windows, costing him about $6,000 to repair.

"The city needs to spend more money on protecting the neighborhoods," Dougham told the B.A.R. in a phone interview last week. "A lot of windows have been broken in the Castro and nothing has been done. The cops come and say 'we are sorry that happened to you,' but we need more than that."

New security gate
The San Francisco Municipal Transportation Agency will soon install a new security gate in the Walgreens parking lot on 18th street between Castro and Collingwood streets. The announcement comes soon after a man, later identified as Corey Ahrens, 48, was found unresponsive in the lot. Ahrens later died and police are calling his death "suspicious."

The parking lot also has a history of car break-ins.

On July 16, a fence and gate system will be installed at both the entrance of the lot on 18th Street and the exit on Collingwood Street. The gate will be closed and locked from 1 to 7 a.m. every day.

"This action is being taken now because MTA and Public Works, who provides cleaning and maintenance, agree it's worth the expense because of the amount of city staff time, energy, and resources required to clean and maintain the lot in absence of a fence/gate that allows us to lock it up," SFMTA spokeswoman Erica Kato wrote in an email response to the B.A.R.

The gate will be locked at 1 a.m. by Patrol Special officers, who are funded by the Castro/Upper Market Community Benefit District, and opened at 7 a.m. by the CBD's clean team staff.

SFMTA installed a similar gate in the parking lot located at 457 Castro Street behind the Castro Theatre about five years ago. Kato said this gate has "worked well to curtail nuisance activities."

SFMTA owns both lots, which have been targeted for car break-ins for many years, explained Greg Carey, chief of the volunteer group Castro Community on Patrol.

"[The] lot should help improve the quality of life for the people living nearby," he said. "The lot is notorious for car break-ins, fights, and public urination. It is often the site for open liquor consumption by underage people, who often have loud music and raised voices."