Business Briefs: Nonprofit tends to the needs of LGBT agriculturists 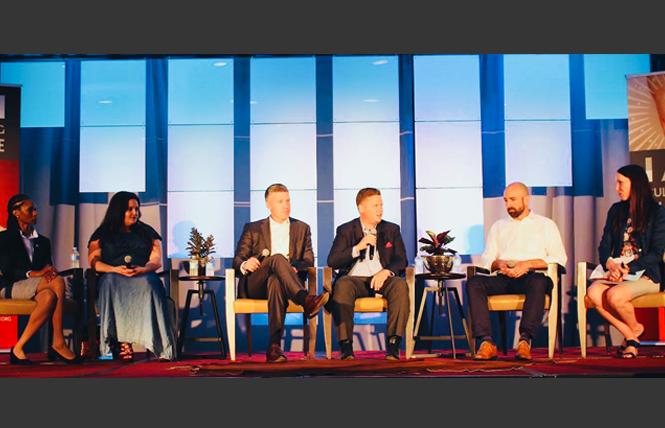 At the Cultivating Change Foundation's fourth summit for LGBTQ agriculturists and their allies, and first to be held in the Midwest, attendees listened to workshop sessions on such topics as "Growing Bridges: Research on Lesbian Farmers & Their Communities" and "Could Grandpa Have Been Wrong? Sustainable, Profitable Managed Grazing."

Sponsors included corporate giants in the agricultural sector, such as Monsanto, Tyson Foods Inc., and Corteva Agriscience, DowDuPont's agriculture division, as well as the U.S. Department of Agriculture and AgriCorps, which sends recent college graduates to work with farmers in the African countries of Liberia and Ghana.

Roughly 200 people attended this year's three-day conference, held in late June in Des Moines, Iowa. In addition to helping connect LGBT agriculturists, the annual summits also aim to educate industry leaders on how they can make their workplaces more welcoming to LGBT employees.

"The focus is on strengthening the agricultural sector as a whole to grow and thrive and be more inclusive," explained Marcus Lee Hollan, a co-founder of the foundation and its current executive director.

It also is allowing people from different fields within the agricultural sector, whether they are farmers and ranchers or food scientists and policy makers, to come together and meet face-to-face.

"We are bringing together disciplines within agriculture that typically are not sitting at the table together talking about the future of the industry," said Hollan. "We believe we are breaking down those silos."

As the foundation's other co-founder, Jesse Lee Eller, explained in an interview this week with the Bay Area Reporter, "Anyone who has an impact on the agricultural industry is considered an agriculturist."

Hollan, 33, and Eller, 32, launched the nonprofit in 2015 as a "passion project" of Studio 5, the creative learning firm based in San Francisco that Eller founded and oversees as CEO. Hollan is the firm's COO.

The friends of nearly two decades have been volunteering their time toward establishing the foundation and are in the process of hiring an executive director to succeed Hollan. They are looking for someone who can focus full-time on fundraising and growing the nonprofit's reach.

The foundation currently operates on a budget of $90,000, which largely funds the annual summits and other regional events held throughout the year. The board has yet to determine a salary amount for the new executive director or a budget for the next fiscal year, decisions the seven-person oversight body will make when it meets in August.

"We think we have taken it to a place where it has momentum. Now we want to bring on a person who can grow and evolve the conversation," said Eller.

Although San Francisco is home to many LGBT nonprofits, it is not thought of as being at the center of the agricultural field. Yet, argued Eller, having the foundation based in the city makes sense. Many food trends championed in the Bay Area region, he noted, impact what Americans' eat and shop for in the grocery aisle.

Plus, California is a major farming state, added Eller. 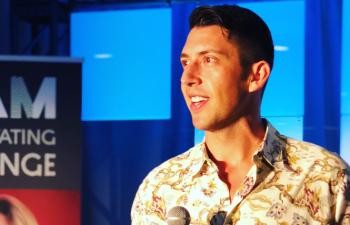 "We have a ton of influencers and thought leaders within the Bay Area who impact agriculture, especially when you think about agriculture tech," he said. "You have nontraditional agriculturalists creating components of technology and science that are impacting the agricultural industry in positive ways."

The gay men first met at California State University, Chico, where they both earned Bachelor of Science degrees in agriculture business. They bonded over their shared childhood experiences of growing up in rural parts of the Golden State.

Hollan's family raised him in the rural foothills of Mariposa County near Yosemite National Park. He was active in the 4-H Club and enrolled in agricultural leadership development programs sponsored by the National FFA Organization, formerly known as Future Farmers of America.

Eller is from a fifth generation farming family based in Corning, California. One side of his family raises cattle, while the other grows rice in Tehama County south of Redding. Like Hollan, he was active with FFA.

After college, Hollan left for graduate school in Kentucky while Eller attended the University of San Francisco, but they remained in touch. In 2015, they held the first Cultivating Change Summit in Atlanta as a way to kick-start a national discussion about LGBT people working in the agricultural industry.

The next two summits took place in Sacramento. The foundation's work received the notice of the Obama administration, which invited its leaders to participate in the White House Rural Council.

As part of its mission, the Cultivating Change Foundation works with companies that are in the food, fiber, and natural resources sectors on attaining, and maintaining, a perfect 100 score on the Human Rights Campaign's Corporate Equality Index. Monsanto and Tyson both received 100 scores in the 2018 index, as did the Dow Chemical Co., which is now known as DowDuPont.

The foundation also created the Cultivating Change Collegiate Ambassador Program to assist LGBT collegiate agriculturists with academic and professional advancement in the field. The first Students for Cultivating Change group was formed on the campus of Pennsylvania State University.

Because the U.S. Census does not collect sexual orientation or gender identity data, there is no way of knowing how many LGBT people work in the agricultural sector.

"We do not have a sense of how many LGBT people work in this field. Part of the reason for the foundation is to get metrics on that," said Hollan. "You can't count if you are not counted."

Apart from the yearly conferences, the foundation hosts regional meetings in cities across the country. It will be holding a reception in Provincetown in September and one in San Francisco in November.

To learn more about the Cultivating Change Foundation and its work, visit its website at http://www.cultivatingchangefoundation.org/.