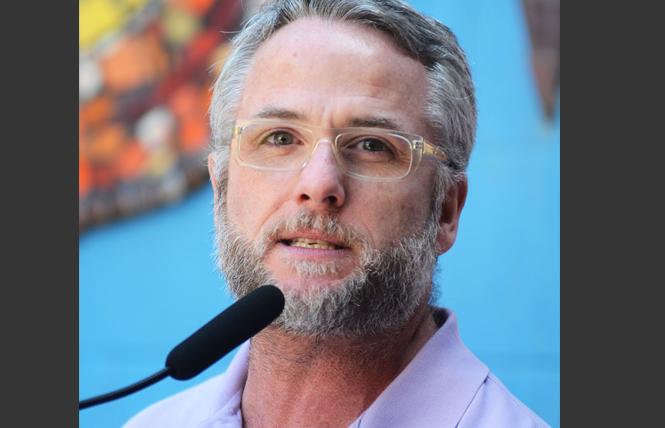 This fall, Californians will have a chance to vote on the Affordable Housing Act, which would repeal the Costa-Hawkins Rental Housing Act and return to city governments the option to expand rent control if they feel it's necessary to their communities' needs.

While the Legislature had been working on a compromise to the ballot measure, it was reported that talks collapsed last week, meaning the initiative, which has already qualified for the ballot, will go to voters, as the secretary of state's deadline to remove items from the ballot was Tuesday.

The repeal campaign is largely funded by the AIDS Healthcare Foundation, which is very exciting. AHF was founded in 1987 as the AIDS Hospice Foundation in Los Angeles. At the time, many people living with HIV/AIDS were abandoned by their families, treated inhumanely at hospitals, and were evicted by landlords only because of their medical condition. The foundation was set up to provide affordable housing for people living with HIV/AIDS, as it was a critical issue for the AIDS movement in the U.S. - and that has not changed. As the founder of the AIDS Housing Alliance SF - now known as the Q Foundation - I know that housing is the #1 battle for people with HIV/AIDS, but I also know we're facing a statewide housing crisis for all people, so it's very moving to me that the AIDS community, despite past discrimination in housing from society, is leading this fight.

For years, I have mused on the almost spiritual nature of HIV/AIDS, and how the suffering of people with HIV has been a sacrifice that moves society forward.

Yes, we experienced unimaginable horror as our bodies, our loved ones, and our entire communities were wiped out, but we learned about our bodies - and propelled the global society's knowledge of disease and health forward in nearly unimaginable ways. We learned how to fight against the odds, how to band together to come out of hiding, to stare down extensive discrimination and threats to our well-being. And we finally learned that the cavalry was not coming, that our government had been captured by forces that would not allow it to address the crisis that was so central to our lives.

Thirty-five years after starting my career in AIDS activism, I sit here today seeing so many parallels between the obstacles to effective action on the housing affordability crisis, and the obstacles we faced with the HIV crisis. And we know from experience, essential resources are not coming. Too many politicians in Sacramento have been captured by the corporate landlord lobby and are afraid to take action to address the suffering of millions of Californians. That's why it is time for the community to, again, rise up and take matters into its own hands.

It's especially important for people living with HIV/AIDS to be able to stay in long-term affordable housing, as we have specific and critical needs that require us to stay in communities where we have access to specialized medical care and social support networks that we fought to create.

Yet, all over the state, corporate landlords and real estate speculators are displacing members of the HIV-positive and LGBTQ communities in search of more profit from their homes. I know, as I was one of those displaced. I ended up OK, but I was one of the lucky ones.

Nearly everyone knows someone who has had to move because his or her rents went up astronomically. All over California, families who just want to be able to live near where they work, or send their kids to good schools, have been displaced into areas far from their jobs and quality child care.

Opponents of repealing Costa-Hawkins would like you to believe that allowing cities to expand rent control protections will only worsen the housing crisis, that new developers won't build new housing if they can't reap as much profit as they possibly can.

But it's important to remember that landlords are guaranteed a profit for their rental units under the state constitution. They can even pass on the costs of repairing their buildings onto their tenants.

The only thing that would prevent developers from building new units under a Costa-Hawkins repeal is greed.

This November, voters will have the opportunity to repeal Costa-Hawkins and tell corporate real estate interests that we value people over profits. The opportunity will come, in part, from the sacrifice of people with HIV/AIDS. And I, for one, am very proud of that.

Brian Basinger is executive director of the Q Foundation.