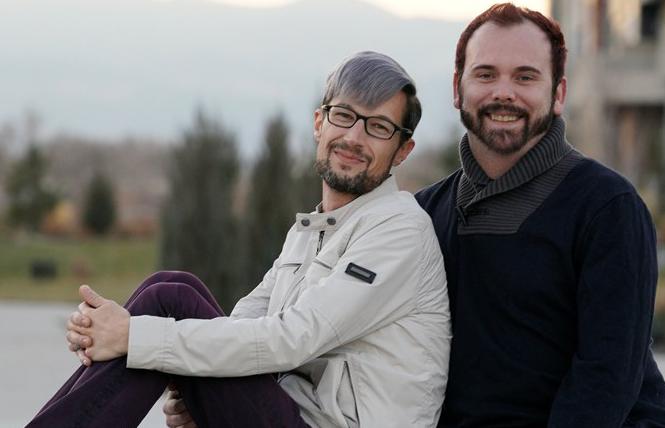 David Mullins, left, and Charlie Craig did not get the victory they were hoping for in their Supreme Court case. Photo: Reuters

Anti-gay baker Jack Phillips may have won his battle to discriminate against same-sex couples, but he lost the war.

That was the consensus among LGBT legal experts Monday, when the high court ruled 7-2 for Phillips, who had refused to sell a wedding cake to a same-sex couple in Colorado. But it's a narrow ruling that focuses on what the court said was hostile treatment toward Phillips by the Colorado Civil Rights Commission. Justice Anthony Kennedy, who wrote the majority decision, said the commission demonstrated "clear and impermissible hostility toward the sincere religious beliefs that motivated [Phillips'] objection." That's because someone on the commission said this: "Freedom of religion and religion has been used to justify all kinds of discrimination throughout history, whether it be slavery, whether it be the Holocaust ... we can list hundreds of situations where freedom of religion has been used to justify discrimination. And, to me, it is one of the most despicable piece of rhetoric that people can use - to use their religion to hurt others."

Significantly, the court did not decide that any business has a right to discriminate against customers because of who they are. The American Civil Liberties Union, which represented the gay couple, Dave Mullins and Charlie Craig, said, "[T]he court's decision affirms again and again that our nation's laws against discrimination are essential to maintaining America's open society and that states can pass and enforce those laws, including in the context of LGBT people."

The majority opinion ruled for the Phillips' Masterpiece Cakeshop because "it was entitled to the neutral and respectful consideration of its claims in all the circumstances of the case," the ACLU stated. The majority of justices believed the bakery didn't receive that basic fairness. "These disputes must be resolved with tolerance, without undue disrespect to sincere religious beliefs, and without subjecting gay persons to indignities when they seek goods and services in an open market," the decision read.

Of course, right-wing groups that support Phillips were quick to claim total victory and that businesses have a right to discriminate - that's not what the court said. This will cause confusion and the false belief that businesses can turn away LGBT people.

"We dodged a bullet today," said gay state Senator Scott Wiener (D-San Francisco) in a statement, "in that the Supreme Court did not reach the ultimate question of whether people have a constitutional right to violate anti-discrimination laws based on their religious beliefs. That radical argument will be decided another day."

He's right about that. One of the concerns Kennedy raised in the opinion was that at the time of the incident, in 2012, Colorado did not recognize same-sex marriage. (Mullins and Craig had gotten married in Massachusetts, which did allow such unions, and wanted the wedding cake for a reception in Colorado.) Now, of course, thanks to Kennedy and the high court in 2015's Obergefell v. Hodges decision, same-sex marriage is legal in all 50 states. This means similar cases could make their way to the court, where the broader issues of religious freedom and anti-discrimination laws could be decided.

One of those cases is Ingersoll v. Arlene's Flowers, out of Washington state, in which a florist refused to sell flowers to a gay couple for their wedding. The ACLU noted that the Washington Supreme Court ruled unanimously that the shop had no constitutional right to turn the couple away, and a petition for review by the U.S. Supreme Court is pending.

In February, a Kern County Superior Court judge ruled in another case that Tastries Bakery owner Cathy Miller can continue to discriminate against same-sex couples after she refused to make a cake for a lesbian couple, who filed a complaint with the California Department of Fair Employment and Housing. However, that ruling is not final and the case is expected to continue this month in Bakersfield. The judge's ruling relied heavily on the First Amendment. In court Miller's attorney, Charles LiMandri, made the argument that her free speech rights and her right to free expression of religion trump the state's arguments that she violated a law against discrimination, the Bakersfield Californian reported.

One thing the Masterpiece Cakeshop case did expose is that appointees to various boards and commissions, whether state or local, should be unbiased and respectful. Candidates for civil rights commissions should be able to determine whether rights are being violated without resorting to bigoted statements.

That's something on which we could all agree on.