Resist: Queer youth to the front of gun debate 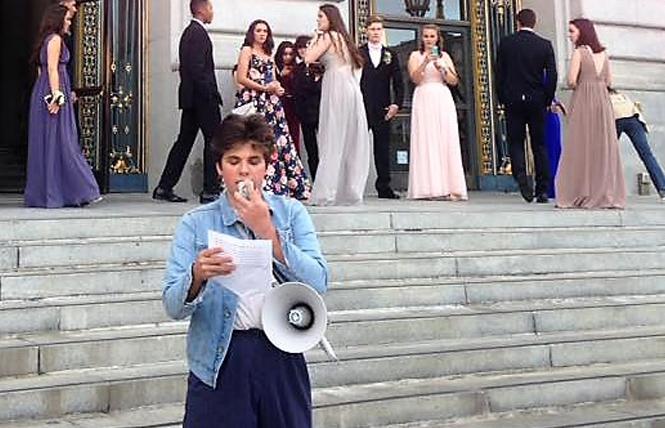 High school student Jake Cohen addresses a crowd of about 80 people protesting gun violence at City Hall while prom attendees file in behind him. Photo: Christina A. DiEdoardo

Hours after the guns fell silent in Santa Fe, Texas, after yet another school shooting on Friday, May 18, high school students in the Bay Area assembled at City Hall in San Francisco to deliver a simple message.

"In the eyes of this country, we are old enough to die at school, but too young to defend ourselves from the weapons that cut us down," Jake Cohen, a queer student at Tamalpais High School, said to a crowd of about 80 people on a cool spring evening.

"We are the victims," he said. "And mark my words, the victims will soon become your leaders."

In some ways, they already have. Queer youth were in leadership roles in the April action by high school students at the Cow Palace against the Crossroads of the West Gun Show, just as they were at City Hall.

"The right to own a firearm and wield it unchecked is not justice," said Cohen. "Nor is it freedom. We will not stop fighting for the victims of Sandy Hook, Las Vegas, Pulse, and Santa Fe."

The event was organized by a coalition of students, including members of Bay Area Student Activists, which was founded after the March for Our Lives Against Gun Violence in late March.

Other speakers demanded the imposition of universal background checks and mandatory waiting periods for all firearm purchases, the creation of gun violence restraining orders in those states that currently lack them, and the repeal of the Dickey Amendment (which currently prevents the federal Centers for Disease Control and Prevention from spending money "to advocate or promote gun control"). They also want a ban on all semi-automatic weapons, large capacity magazines, bump stocks (which allow a semi-automatic weapon to be fired more quickly), and silencers.

Beyond the prohibition of semi-automatic weapons, these proposals would largely extend California's gun regulation regime to the entire country, as the possession of bump stocks, high capacity (i.e. more than 10 round) magazines, and silencers are already crimes here. The students also called for reforms to restrict the allowable use of deadly force by police officers and declared those killed by cops were victims of gun violence just as much as those who fell at Santa Fe and elsewhere.

In an ironic twist, students from a high school that had rented out City Hall for their prom that night began to walk up the steps in formal wear behind the protesters during the action. Several student organizers called on the attendees to "join us!" but none did. It was as if a metaphor for what it means to be a teenager in America at this moment in history was playing out before our eyes.

That's not intended as criticism of the prom attendees who, like their comrades on the megaphones, are at ground zero for the kind of violence seen from Parkland to Santa Fe in a way my generation will never personally experience. While I couldn't attend prom the way I would have liked when I was their age, I didn't have to worry about my school being turned into a shooting gallery the way they do.

It is, rather, an indictment of those of us who are their elders and who - for far too long - shrugged our shoulders after the latest mass shooting, said, "What can we do?" and went on with our lives until it happened again. And again.

Cohen and his colleagues are making it clear that type of inaction is no longer acceptable.

If Senate Bill 221 passes the Legislature and is signed into law by Governor Jerry Brown, the sale of firearms, other than at gun buy-back events by law enforcement and ammunition at the facility, would be a crime after January 1, 2020, which would presumably force the shows' organizers to find another venue.

Those who have followed the history of this issue know that's a big if. State legislators, including gay former senator (and current mayoral candidate) Mark Leno, have tried to ban the shows for more than a decade, but those bills have either died in the Legislature or were killed by Governor Arnold Schwarzenegger or Brown.

Then again, those prior efforts didn't take place against a backdrop of youth-led activism against gun violence and in favor of restrictions on gun sales. As Brown approaches the end of his decades of public service, he might well be persuaded that today's conditions merit a different response from him, especially if he's lobbied by those young people who went into action at the Cow Palace and City Hall.

Sex Worker Justice Now!
At noon Saturday, June 2, at Frank Ogawa Plaza (also known as Oscar Grant Plaza) at 14th Street and Broadway in Oakland, the Sex Worker Justice Now! rally and march will take place. The event is sponsored by Bay Area Prostitution Support and St. James Infirmary, which provides medical and other support services to sex workers and other marginalized communities that have come under increasing pressure from the current regime in Washington. Sex worker allies are also invited to attend.