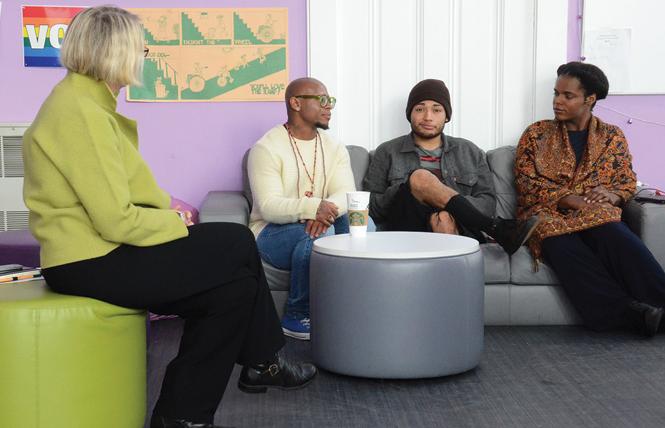 For years San Francisco has made it a priority to move homeless veterans and families with young children off of the city's streets and into supportive housing. City policy has also favored the chronically homeless, directing programs to assist those who have been living on the streets for eights years or longer.

Homeless youth, meanwhile, have not seen the same prioritization by city leaders to get them housed. There is a lack of dedicated housing options for them, even less for those who are LGBTQ, despite their accounting for 43 percent of the estimated 1,500 homeless youth on the city's streets.

With residents set to elect a new mayor in the special election on the June 5 primary ballot, advocates are calling on the winner to make ending youth homelessness, particularly among LGBT youth, a priority of their mayoralty.

"For me, the issue comes down to the fact these kids are out there dying on the streets for being their real authentic selves. It should be an issue for all of us," said Richard Greggory Johnson III, Ph.D., a professor of public policy and management at the University of San Francisco School of Management.

Johnson, who is bisexual, is hosting a national symposium Thursday (April 19) focused on various ways cities can address LGBT youth homelessness. It is sponsored by the journal Public Integrity, which this month is also publishing several articles looking at specific solutions for meeting the needs of homeless LGBT youth.

Topics include transgender youth, how LGBT youth are treated by the criminal justice system, and the needs of LGBT homeless youth of color, which was co-written by Johnson.

"I believe that we have the talent and the resources to make this happen in San Francisco," Johnson told the Bay Area Reporter. "Again, this topic is not new. That is the painful thing about it. Yet not much, historically, has been done to address it."

Gay District 8 Supervisor Jeff Sheehy has been making the argument that San Francisco is failing its homeless youth population since being appointed to the board last year. He worked with the late mayor Ed Lee to secure $1.54 million in supplemental funds in the city's 2017-2018 budget for a number of local homeless youth programs.

And as the B.A.R. reported earlier this month, Sheehy and Mayor Mark Farrell have committed to continue the funding in the 2018-2019 fiscal year budget. The majority of the money, $906,000, has gone toward housing subsidies for transition-age youth between 18 and 24 years old.

The San Francisco LGBT Community Center expanded its drop-in hours for its youth program to six days a week, including Saturdays, with the $289,000 it received. And Larkin Street Youth Services received $350,000 to partly fund a new outreach coordinator and increased staffing for outreach teams that work with homeless youth in the Castro and Haight Ashbury neighborhoods.

Yet, Sheehy believes the city should be doing more to assist homeless youth. He has called for there to be a youth-only Navigation Center, which provides temporary housing on a limited basis while the staff tries to find a more permanent housing option.

And he is one of the sponsors of Proposition D, the "Housing for All" initiative on the June ballot that would raise $700 million over the next 10 years for various housing programs and homeless services. A portion of the funds, $90 million, would be dedicated for homeless youth.

"The city should commit to ending youth homelessness," Sheehy told the B.A.R.

Gay attorney Rafael Mandelman, who is challenging Sheehy for his supervisor seat on the June ballot, also contends the city can, and should, be doing more to address homelessness and the lack of affordable housing in the city.

"We have the resources - the city has a huge budget - within the community to solve these problems," said Mandelman, who serves on the board overseeing City College of San Francisco and has been working to address the needs of the community college's homeless students.

In its 2018 annual report on the state of youth homelessness in the city, Larkin Street not only called on city leaders to open the youth-specific Navigation Center and expand youth-dedicated housing options but also to finalize a five-year strategic plan to prevent and end youth homelessness and implement a three-year pilot study of innovative ways to house homeless youth.

"With the right investments and policies in place, we can ensure that any experience of homelessness by a young person is rare, brief, and nonrecurring," stated the agency in its report.

Due to its reputation as a "gay mecca," San Francisco for decades has been attracting LGBT youth looking for a safe haven and refuge from the harassment and violence they face in their hometowns. Angel, 22, who preferred not to disclose his last name and uses gender-neutral pronouns, last year walked for eight days from their home in Kings County in the Central Valley to find a more accepting community in San Francisco.

Pansexual and genderqueer, Angel stayed in hotel rooms, slept in city parks, and spent the night in a shelter run by Larkin Street. In January, on their birthday, Angel moved into permanent housing for transition age youth run by Community Housing Partnership.

Angel told the B.A.R. there needs to be more housing specifically for LGBT homeless youth because, even in San Francisco, they can face harassment from other homeless youth who are transphobic or homophobic.

"I stayed on the streets because there was a lot less drama," said Angel. "We need to get housing for LGBT youth because a lot of people would rather be homeless than deal with that shit."

One of the places Angel found support was at the LGBT Community Center. They are now a member of the center's youth leadership council and are helping to connect other homeless youth with supportive services and housing options in the city.

"Before I came to the city, I never had been to a place like this where I could drop in, be safe, and be myself. It definitely changed my life since I have been here," said Angel, who is now working to get their GED and enroll in college.

Candidates' pledges
All four of the leading mayoral candidates pledged to the B.A.R. that they would tackle youth homelessness should they be elected to Room 200 at City Hall. Each has included homeless youth as part of their plans to address homelessness.

Gay former District 8 supervisor and state lawmaker Mark Leno pointed to his plan to end street homelessness in the city by 2020. While his plan does not specifically mention LGBT youth, he said they would be covered by his plan.

"So, in the plan, we did not call out any subpopulations, but I am well aware of course, having represented our LGBTQ community and the Castro/Eureka Valley community for the past 18 years in public office, no one needs to remind me what the statistics show," said Leno. "We are disproportionately high in terms of youth homelessness, adult homelessness, adult poverty rates. We know these rates are too high."

Despite the city's liberal reputation, Leno acknowledged it has not been as welcoming to LGBT youth as it could be. He recalled the backlash he received when he was running to represent District 8 and supported opening youth shelters in both the Castro and Noe Valley, particularly to house queer youth.

"They are getting kicked out of their homes across the country. They are abused emotionally, sometimes sexually. They run away looking for a haven, looking for refuge and come to San Francisco because that is where they hear it is safe and welcoming," said Leno. "Unfortunately, we do not have the safety net to provide for them as we should. When I was in local office I did just that. As mayor, I will have a special sensitivity of course to youth facing high rates of homelessness."

Board President London Breed has pledged to move everyone living in tents on the streets into supportive housing within a year. But, unlike Leno, is not claiming to end all street homelessness in a certain timeframe.

"Based on conversations I have had with all the departments, it is realistic to remove all the tent encampments within a year's time in the city. We have a plan we started working on last year, so I am confident that that is something I can do within a year's time of taking office," Breed told the B.A.R. "And as it relates to ending street homelessness, you know, I am going to make sure ... I am not going to make a definitive commitment around that because there are a lot of different challenges that exist as it relates to homelessness."

"It's something I thought was a really great idea and could be something, potentially a program, we could implement here. And if successful, could be a great opportunity for housing for some of our homeless youth," said Breed. "And more specifically, I know this has been a challenge with a lot of young people in the Castro, in particular in the Duboce Triangle area, as well as in the Haight Ashbury community. Focusing on helping young people at an early age to get on their feet when they are having challenges is something I care about."

San Francisco's LGBT Community Center, in fact, is set to launch a host home program this fall. It recently learned that the federal Department of Housing and Urban Development had accepted its grant application to start a two-year pilot host home program.

"We are just starting negotiations, but anticipated that the funding for the project will be $350,000," Rebecca Rolfe, the center's executive director, told the B.A.R. this week.
District 6 Supervisor Jane Kim agreed that the city should prioritize ending LGBT youth homelessness.

"This is a city problem. It's an affordability issue. And for the segment of our homeless count where they are homeless or insecurely housed purely for economic reasons, we should be doing everything that we can to keep those folks housed in place, because, as you said, they are the easiest group to house," said Kim. "I think that the group that is most challenging are the people that folks see every day, the chronically homeless."

Civil rights attorney and former supervisor Angela Alioto would revive the 10-year plan to address homelessness in the city developed by the committee she chaired during the administration of former mayor Gavin Newsom. She told the B.A.R. she would also commit more city funding to agencies addressing youth homelessness, like Larkin Street.

"I believe that utilizing that 10-year plan will house everybody that is sleeping on the streets that's chronic. Our plan was chronic homelessness," said Alioto, adding that refers to people who have been homeless for four to six years and, generally speaking, don't want to leave the street. "These are chronic. It's the hardest population. If you want to get the easiest population, get the kids, get the unaccompanied women who have been sexually abused. That's the easiest because they're the newest on the streets."