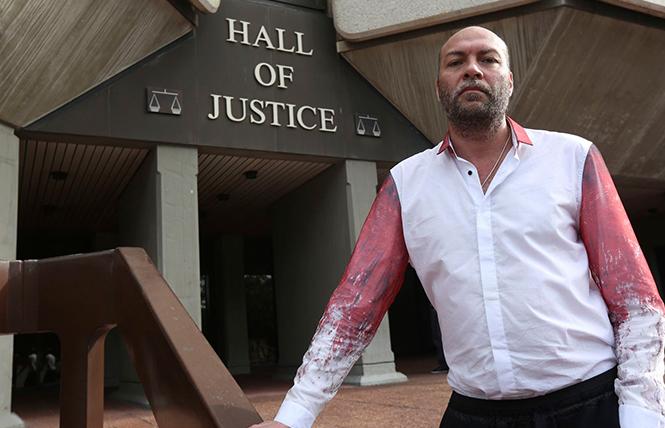 The High Court of Trinidad and Tobago last week struck down a colonial-era anti-sodomy law.

Before the judge's decision was issued, hundreds of LGBT Trinidadian and Tobagonian activists wearing rainbow outfits and singing the Caribbean island nation's national anthem gathered April 12 outside of court in Port-of-Spain.

In the case, Jason Jones v. the Attorney General of Trinidad and Tobago, Jones, an expatriate gay rights activist living in the United Kingdom, argued that the colonial-era Sexual Offenses Act violated his right to privacy and freedom of expression.

Media outlets reported that when Rampersad's announcement came striking down the act, particularly Sections 13 and 16, the two clauses that criminalized homosexuality, the crowd cheered and started chanting, "Love is love."

The law is similar to anti-sodomy laws being challenged in other Caribbean nations. In Belize, the court struck down an anti-sodomy law in 2016. There is a similar case under review in Jamaica.

Belize's Supreme Court ruling is currently being appealed to the Caribbean Court of Justice.

Additionally, many countries, like Belize and Trinidad and Tobago, still have a law on the books, Section 8 of the Immigration Act, which prohibits foreign homosexuals from entering the country.

A final ruling on the Sexual Offenses Act will be issued in July after it's decided if the law can be modified or removed entirely. Until then, the law will remain in place.

Opponents of the case, led by the T&T Cause coalition, demonstrated and handed out anti-LGBT propaganda leading up to the decision.

Addressing conservatives' religious arguments, the judge said the ruling "is not an assessment or denial of the religious beliefs of anyone," reported LGBTQ Nation.

Jones' supporters responded with their own marches and campaigns, speaking out for a "free and equal Trinbago" (a combination of the two islands' names).

Brendon J. O'Brien, a social justice advocate, told Global Voices, "Changing the law isn't even about faith, or what particular people believe. It's about maintaining the freedom, safety and dignity for every single Trinidadian, regardless of who they love or how they express that love."

The ruling is only the beginning of an ongoing struggle. Trinidad and Tobago, like many Caribbean countries, has a "safer savings clause," in its constitution that preserves existing laws from challenges, regional pollster Peter Wickham told Barbados Today.

He also expressed caution regarding Trinidad and Tobago's potential influence on other Caribbean island countries, such as Barbados.

Trinidad and Tobago's attorney general vowed to appeal the ruling.

Despite the tenuous situation following the ruling, LGBT activists celebrated, praising the ruling as a movement toward human rights in the Caribbean.

"What I think the judge pointed out was 'here every creed and race find an equal place,' and I think we must all come together now and embrace each other in true love and respect," Jones told LGBTQ Nation. "This is not about LGBT, this is about the rights and freedoms enshrined in our constitution."

Ro-Ann Mohammed, co-director of Barbados Gays, Lesbians and All-Sexuals Against Discrimination, responded to the announcement, noting that anti-sodomy laws "were out of touch and sorry reminders of a British colonial-era which the colonial master himself no longer subscribes to."

"This landmark case signifies a necessary step in the decolonization of our independent Caribbean territories," Mohammed told Barbados Today.

"The judge came down on the right side of history in this case by striking down the buggery law and ruling it as unconstitutional," Placide said in an April 12 statement. "The activism and advocacy will continue in Trinidad and Tobago and across the Caribbean until equality for LGBTIQ people is guaranteed."

May addresses anti-gay laws
British Prime Minister Theresa May told Commonwealth leaders at the biennial Commonwealth Heads of Government meeting this week that Britain would support any nation updating outdated discriminatory laws against LGBTs and women.

"Across the world discriminatory laws made many years ago continue to affect the lives of many people, criminalizing same-sex relations and failing to protect women and girls," said May at an April 17 meeting with Commonwealth delegates, reported the BBC.

"The U.K. stands ready to support any Commonwealth nation wanting to reform outdated legislation that make such discrimination possible," she said.

Tuesday, May said that British colonial anti-sodomy laws were "wrong then and wrong now," reported the BBC.

"Nobody should face discrimination and persecution because of who they are or who they love," May said.

The April 16-18 gathering of leaders from the 53 Commonwealth members looked at the future of the Commonwealth and follows the aforementioned court ruling in Trinidad and Tobago. Earlier this year, Bermuda, the oldest state of the Commonwealth, became the first country in the world to reverse same-sex marriage.

Leading up to the meeting, LGBT activists were unsure if May would address the issue.

"Without an apology for Britain's role in imposing anti-gay laws in Commonwealth countries in the colonial era, any statement that Theresa May makes on LGBT rights is likely to alienate and provoke a negative reaction from homophobic countries," Tatchell told Gay Star News. "An apology could be a game-changer. It would help reframe the LGBT debate in the Commonwealth ... [and] is more likely to resolve an engagement with Commonwealth nations."

Prior to the summit Tatchell and other LGBT activists from the Commonwealth and around the world speculated that May and Foreign Secretary Boris Johnson "caved in to pressure from homophobic member states."

A guide on international best practices on sexual orientation and gender identity expected to be published by the Government Equalities Office for the opening day of the summit wasn't released and no new publication date was indicated.

"The government has been unable to confirm whether or not the guide would be published in time, saying only that it would come out 'in due course,'" wrote Lewis Brooks and Felicity Daly in an op-ed in the Guardian.

Since the last meeting in Malta in 2016, three member-states decriminalized homosexuality: Belize and Seychelles that same year, and, last week, Trinidad and Tobago.

Currently, 36 of the 53 member-states of the Commonwealth continue to criminalize homosexuality by retaining British colonial-era buggery laws or gross indecency laws on the books.

Some members of Uganda's parliament are calling to bring back the so-called jail the gays bill, according to media reports. Uganda is a Commonwealth member.

Last week, leading up to the summit, members of Uganda's parliament praised Speaker of Parliament Rebecca Kadaga and passed a motion for standing up against a discussion of homosexuality at the Inter Parliamentary Union Summit in March. The proposed discussion by IPU president Gabriella Barroza was done without consent from Asian and African representatives, according to media reports.

These laws affect a total of 2.4 billion people and are in countries with historic ties to the United Kingdom, many of them former colonies, or with ties to other Commonwealth members, Boris Dittrich, LGBT advocacy director at Human Rights Watch, wrote in an op-ed published by the Advocate.

Last month, HRW published a report, "I Have To Leave To Be Me," exploring LGBT communities in the eastern Caribbean. The report found that the existence of the anti-sodomy laws emboldened people to discriminate against LGBT people, wrote Dittrich.
LGBT advocates who are members of the Commonwealth Equality Network are expected to speak at four forums hosted by the Commonwealth Summit.

The network is a coalition of 46 organizations from 42 countries working for LGBT rights. It is also the first LGBT organization to receive accreditation from the Commonwealth in 2017, allowing the network increased access, participation, and information about Commonwealth matters.

Prince William praised the work of the network at a reception last month.

Other LGBT delegates from various Commonwealth countries aren't counting on the politicians to uphold LGBT rights. They will join Tatchell and other campaigners at a demonstration at the Commonwealth secretariat's headquarters at Marlborough in London April 19.

To read "I Have To Leave To Be Me," visit https://www.hrw.org/report/2018/03/21/i-have-leave-be-me/discriminatory-laws-against-lgbt-people-eastern-caribbean .