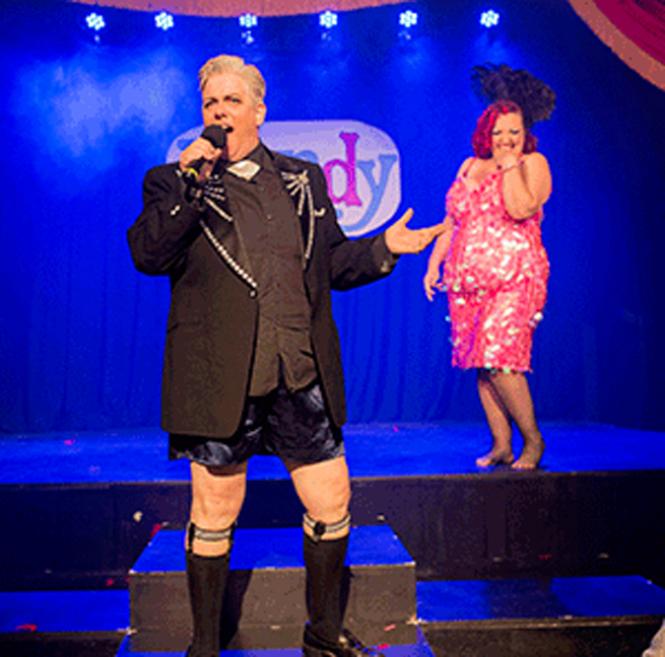 "A drag king is an antidote to drag queens," says drag king extraordinaire Leigh Crow, who spent 12 years as an Elvis Presley impersonator named Elvis Herselvis. "It's expressing masculinity in a satirical way."

A drag king, Crow explained, can be female or male. For Crow, her life as a king began with her Elvis performances. "I dressed as Elvis on Halloween," she recalls. "A friend who was the owner of a club decided to put on a drag show, and that's what happened."

"I'd always been a mimic as a kid," she said. "Elvis was an impersonation that I already did. It was a logical choice."

Crow continued to perform after Elvis. Currently she can be seen playing Captain James T. Kirk in the regularly scheduled Star Trek Live shows at the Oasis. She also hosts Dandy, her own Oasis show, which is seen on the second Sunday of every month at 7pm, "with variations," she said.

Crow told the Bay Area Reporter how her show got its name.

"A dandy is someone who is showy or fancy," she explains. "Someone who takes pride in looking sharp."

At a recent Dandy show, a David Bowie impersonator stepped onto the stage and brought down the house. Crow introduced this act, and others, smartly dressed in her Captain Kirk uniform. Though most of the drag kings were biologically female, there was one man on the stage, and popular local drag chanteuse Katya Smirnoff-Skyy made a guest appearance.

"Typically, we have a first act that's all live singing," Crow said. "The second act is lip syncing. There are variations; we don't always stick to the formula. We encourage audience participation. We have performers back who connect well with the audience."

One performer audiences might see at Dandy is Meghan Eason, whose stage persona is named Meat Flap.

"I have always been very inspired by Meat Loaf," Eason explained. "So, when I decided I wanted to do drag, I spent a lot of time thinking of men and the name just seemed appropriate."

Eason recalled what inspired her to become a drag king.

"When I started doing stage performance I started with burlesque," she said. "That is more of a feminine expression. That was a foreign concept to me because I always felt more masculine than feminine. So becoming a drag king felt very natural and became kind of necessary for me."

Connecting with her audience is paramount to Eason.

"I hope people will take away the experience of having a great time for two hours," she said. "Our audience is made up mostly of queer people and they often have a lot on their minds like political stuff, work life and home life, so having something where they show up and get out of their heads and into our heads is important."

For Crow, Dandy is a personal project. "This is the show I want to be in and that I want to see," she said. "So we had to produce it and to make it happen."

She tipped her hat to Ruby Vixen, her partner, co-producer and co-host, and to Oasis co-owner D'Arcy Drollinger.

Dandy can usually be seen at Oasis on the second Sunday of every month at 7pm, though the schedule does change on occasion.