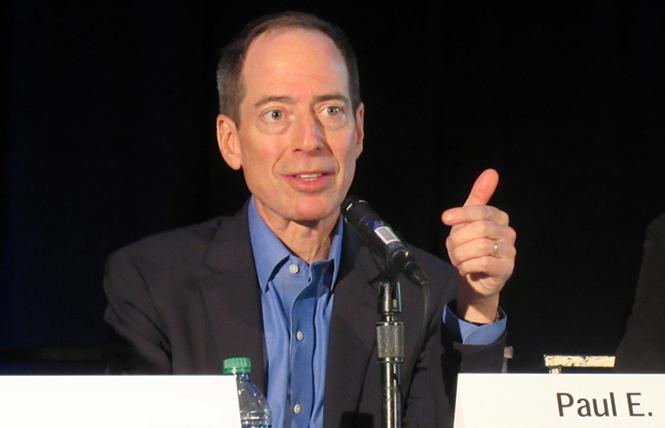 The U.S. Food and Drug Administration last week approved Biktarvy, a one-pill, once-daily combination that contains a new HIV integrase inhibitor and a kidney- and bone-friendly version of tenofovir.

Biktarvy, developed by Foster City-based Gilead Sciences, was approved for adults starting HIV treatment for the first time and for those currently on treatment with an undetectable viral load who wish to switch to a more convenient or better-tolerated regimen. Studies showed the new regimen was highly effective with few side effects.

"Another new HIV med with a vowel-packed name - is this a big deal? It is. In one small pill we have three of the best antiretrovirals ever made," study investigator Dr. David Wohl from the University of North Carolina at Chapel Hill told the Bay Area Reporter. "Almost anyone starting HIV therapy and many on older regimens can take Biktarvy. We have come a long way."

The new single-tablet regimen contains bictegravir, a well-tolerated integrase inhibitor that does not need to be taken with a "booster," unlike Gilead's older integrase drug elvitegravir (part of the Stribild and Genvoya combination pills). Boosters, also known as pharmacoenhancers, increase the potential for interactions with other medications. This is the first approval for bictegravir, which is not sold as a stand-alone product.

The combo pill also includes emtricitabine and tenofovir alafenamide (TAF), the updated formulation of tenofovir, which studies have shown is less likely to cause kidney problems and bone loss. The older formulation, tenofovir disoproxil fumarate or TDF, is part of the popular Truvada combination pill used for both HIV treatment and PrEP.

People considering Biktarvy should have their kidney function tested before starting the combo and monitored regularly while taking it. They should also be tested for hepatitis B, because the TAF component is active against hepatitis B as well as HIV, and stopping treatment could lead to liver disease flare-ups.

Biktarvy has no food requirements and it is the smallest three-drug tablet containing an integrase inhibitor, according to Gilead.

Besides Stribild (elvitegravir/cobicistat/emtricitabine/TDF) and Genvoya (elvitegravir/cobicistat/emtricitabine/TAF), the other integrase inhibitor combos on the market are ViiV Healthcare's Triumeq (dolutegravir/abacavir/lamivudine) and the recently approved two-drug regimen Juluca (dolutegravir/rilpivirine). Triumeq requires prior testing for a genetic variation that increases the risk of abacavir hypersensitivity.

FDA approval of Biktarvy was based on data from four Phase 3 clinical trials, two of which included people starting treatment for the first time and two of which looked at people changing treatment. These studies showed that the combo was generally safe and well tolerated, with the most common side effects being headache and diarrhea.

At last year's International AIDS Conference in Paris, Dr. Paul Sax from Brigham and Women's Hospital in Boston presented findings from a study comparing bictegravir versus dolutegravir, both taken with emtricitabine and TAF. Another trial directly compared the Biktarvy and Triumeq combination pills. The studies showed about 90 percent of participants taking either regimen achieved viral suppression at 48 weeks.

In October, Gilead announced data from a third study showing that people who switched from a boosted HIV protease inhibitor to Biktarvy were as likely to maintain an undetectable viral load as those who stayed on their existing regimen - again around 90 percent. Results from the fourth study are expected to be presented at an upcoming HIV conference. Biktarvy is currently being further tested in a women-only trial and in a study of children and adolescents, according to Gilead.

"In clinical trials through 48 weeks, no patients taking the regimen of bictegravir plus [emtricitabine]/TAF developed treatment-emergent resistance, results that were observed both in people new to therapy and those who were virologically suppressed and chose to switch regimens," Sax said. "In addition, the clinical data show that the regimen's antiviral efficacy, tolerability profile, and limited drug interactions offer an effective new treatment option for a range of people living with HIV."

Gilead set the wholesale price for Biktarvy at $36,000 a year, which is in the same range as competing options. The company said it would include the new regimen in its patient assistance and copay programs and it is working with the ADAP Crisis Task Force to provide discounts for state AIDS Drug Assistance Programs.

Soon after the FDA approved Biktarvy, ViiV announced that it was filing a lawsuit against Gilead, charging that bictegravir infringes on the patent for dolutegravir.
Gilead denies the allegation regarding the U.S. patent.

"Gilead is pleased to offer Biktarvy as an important new treatment option for a range of people living with HIV across the United States," Gilead spokesman Ryan McKeel told the B.A.R. "We remain steadfast in our opinion that Biktarvy does not infringe ViiV's U.S. patent. ViiV's challenge does not impact our ability to make Biktarvy available to patients in the U.S."