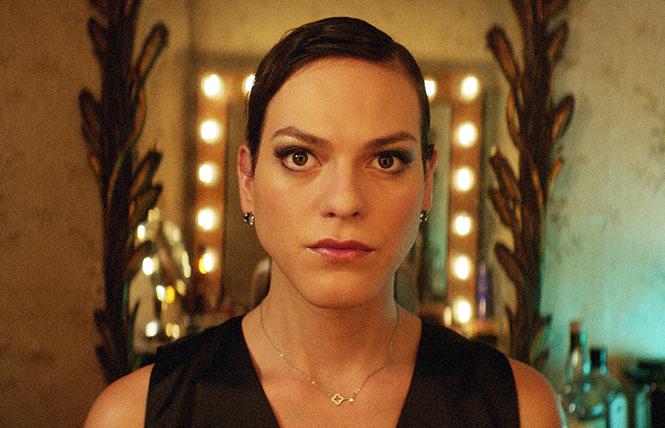 "A Fantastic Woman," the 2018 Best Foreign Film Oscar nominee from Chile, opens in the shadows, within a poorly lit Santiago nightclub. Orlando (Francisco Reyes), an aging textile manufacturer, is celebrating his young lover's birthday. Marina (transgender singer-actress Daniela Vega) is blissfully happy. Now, there's a general rule of thumb that film protagonists must earn their happiness. After all, movies are about happiness for the paying customers, thee and me.

The family's campaign includes denying Marina the right to attend Orlando's funeral, and insisting that she promptly vacate their apartment. Their murderous rage escalates to a brazen physical attack, in which our heroine has her mouth taped shut, and later, to a humiliating police-station interrogation conducted by an arrogant female detective.

"Was he paying you?"

"He was old enough to be your father!"

The filmmakers pose a powerful and moving question for their worldwide audience: What was Marina's crime? What was so hideous about her that the film's conservative forces would relentlessly brutalize and rob this fantastic woman of her respect, dignity, humanity, and ultimately, her identity? At a moment of seemingly global conflict on issues of freedom and identity, the filmmakers are calling for a cleansing, empowering burst of empathy.

Last month I and members of a San Francisco preview audience viewed "A Fantastic Woman," then joined in a Q&A with director Sebastian Lelio and the film's transgender lead, Daniela Vega. Lelio and Vega described their year-long process of developing the story and her character before filming could commence. The audience at the Delancey Street screening praised the film and asked Vega about her experience preparing for this huge transition. She was especially proud of doing her own singing in the nightclub segments.

This is Lelio's fifth feature, and he is currently preparing a lesbian-themed narrative film. He described his film's intentions and methods in a director's note. "I see 'A Fantastic Woman' as a film of aesthetic splendor, narrative vigor, tension and emotion. It's a film that is both a celebration and examination of its main character, Marina Vidal."

I asked Lelio about the hostile forces arrayed against Marina. "The woman police detective seems to represent a very conservative society."

"In Chile, everything is holy war, the country is divided," said Lelio. "It's a country marked by the cross, an influence of Spain, and then 18 years of dictatorship. So that friction is part of life. Only recently the [Catholic] Church has been retreating a little bit on one side. There's another face to the country, the other force, the counterforce is strong as well."

As Vega's Marina Vidal character explains in the film, "What doesn't kill you makes you stronger."