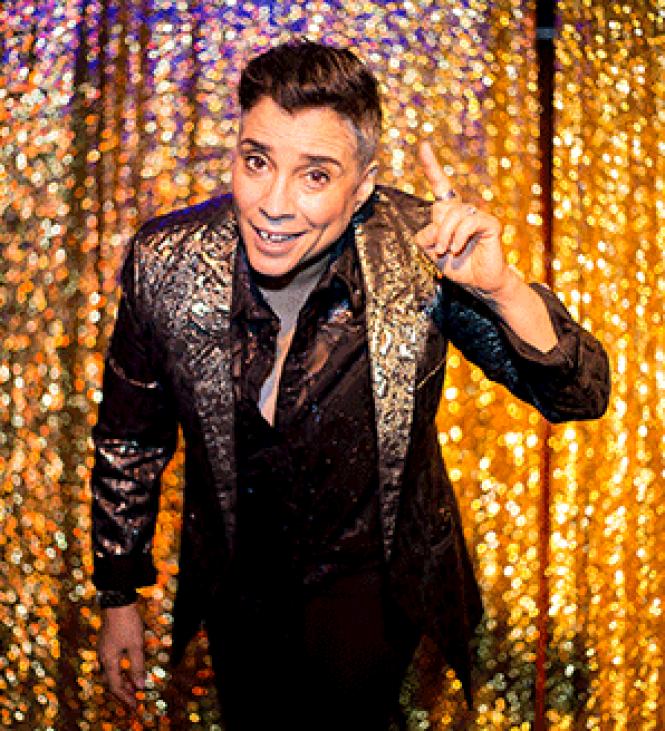 Fans of Marga Gomez, you have just 12 opportunities to see the Puerto Rican/Cuban American lesbian performer's final solo show, "Latin Standards," which premieres at the Brava Theater Center on January 11. The show, a 90-minute tribute to Gomez's father, a singer who performed in New York in the 1950s and 60s, will also inaugurate the new intimate cabaret room at Brava, a recently constructed 80-seat space.

If you're not already a fan, you might want to know that The New York Times gave the production the paper's highest possible praise, a "Critic's Pick," when it played at the Public Theater's "Under the Radar" festival in 2017.

"Yeah, getting almost an entire page in the Friday Times was great," said Gomez in response to a question from the Bay Area Reporter. "They usually save that space for those million-dollar shows."

In a sit-down interview in San Francisco two weeks before the show was set to open, Gomez was clearly focused on her work polishing the performance, which goes to San Jose and Tucson next. "I'm studying the videos of a recent performance," she said. "Cut, cut, cut!"

Gomez works from a home office in a "very small studio" in the Castro District, where she has lived since the 1980s. In addition to writing all of her own material, she acts as her own agent, publicist, and assistant. "There's a lot to do" in putting on a show, she said, but after a few years with a big-time Hollywood agency representing her, Gomez concluded, "I do it better myself. So I always have to be thinking three steps ahead. I'm typically working on my calendar six-12 months ahead of time."

Working with longtime director David Schweizer, Gomez performed the work-in-progress in 2016 at Brava, where she is Artist-in-Residence. The show has also been presented at the Los Angeles Theater Company's "Encuentro de las Americas," Segerstrom Center for the Arts in Costa Mesa, Chicago's Urban Theater Company, and American Repertory Theater in Cambridge, MA.

"Latin Standards" is the story of her father, who went under the stage name Willy Chevalier, and describes his struggle for work as live entertainment venues in New York's Latino community declined. It's a situation not unlike Marga's plight after she began her career with a hipster comedy night at Esta Noche, a doomed Mission District drag club, during the onset of San Francisco's gentrification crisis. With the aid of slides projected onto a large screen looming above her, Gomez draws a portrait of her father and his work, reciting the lyrics as recordings play in the background.

"Why is this my final show?" asked Gomez, sipping on a black coffee while she entertained questions. "I feel I've completed my work" in solo performances, and "have said everything I have to say.

"But this doesn't mean I'm going away. I'm just not going to be doing any more solo shows. There are other things I want to try," she said, although there is nothing definite on the calendar yet. "I'm leaving the door open to be able to perform any of my previous shows into eternity," she added. "Maybe I'll try to do a show without any words."

Gomez also plans to continue doing stand-up comedy, with a regular gig in San Francisco now under discussion. "Nothing to announce just yet," she said. Over New Year's, she "really enjoyed" a gig at Punchline comedy club with Greg Proops.

When asked about her personal life, Gomez asked, "Didn't we already talk about that?" She dropped out of Oswego College, where she was majoring in political science with hopes of becoming a teacher, "because my parents were both struggling entertainers and didn't see a role for me there." But she and her then-girlfriend heard about the burgeoning gay scene in San Francisco, and decided to drive across country. "It wasn't ideal," she said, "because just before we left I learned she had cheated on me with a one-night-stand."

They broke up soon after landing in the Bay Area, with Gomez getting a job cooking and an apartment in a lesbian collective. After gigs in restaurants for four years, Gomez joined a theater company, which toured in Europe for several years. When she got back to San Francisco, Gomez did stand-up comedy, and in 1991, began doing her solo work. Like most artists and entertainers starting out, Gomez occasionally took "day jobs" to help pay the bills. She tried stints walking dogs, serving coffee, and wrapping cannabis chocolates. "None was really as interesting as I'd hoped," she said.

Last year, "I realized it had been a long time since I'd had intimacy in my life. I had a lot of situations that were 'almost dating' or 'almost hooking up,' but things seemed to fall apart." Success struck at the end of 2017, she said, when she met someone "who has been a source of great affection."

As far as being a celebrity goes, Gomez admits she's occasionally recognized in places like Whole Foods and Bi-Rite, where she usually shops. Depending on the day, "I'm sometimes happy to be recognized.

"But mostly," she said, "I'm a celebrity mainly in my own mind."