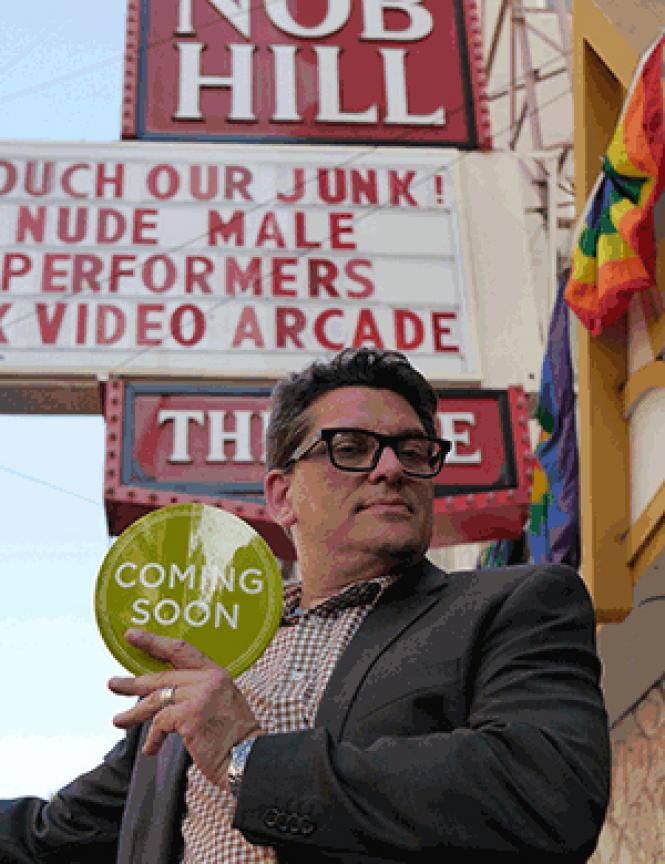 The Nob Hill Theatre, an iconic San Francisco gay male strip club, is going up for sale later this month.

The adult cinema and video arcade, located at 729 Bush Street, will be listed for $347,000, said Zephyr commercial Realtor Steven "Stu" Gerry, the listing agent. For another $3.78 million, the two-story building that houses the theater is also for sale, added Gerry, who said the Nob Hill is among the most interesting properties he has marketed in his many years as a real estate agent.

"I've had a number of sex dungeons," said Gerry, who is gay, in an interview at the Nob Hill.

The property will hit the market October 20 and showings will be "by appointment only," said Gerry, formerly the owner of the renamed Cafe Flore in the Castro and a longtime headwaiter at Bix, a popular South of Market restaurant.

According to Gary Luce, who owns the theater with his husband, Larry Hoover, the Nob Hill is the only club in the city combining cinema and a video arcade.

"Maybe the only one in the nation," Luce said in an interview at the theater. He said customers from around the world are among his regular patrons. "Even people from Amsterdam say there is nothing like this back home."

Luce and Hoover bought the club several years ago after getting a call from Shan Sayles, who owned the Nob Hill and a number of movie theatres across the country. Sayles died in 2016.

"We have enjoyed owning the Nob Hill Theatre but are ready to retire," said Luce, who manages the theater with his husband. "We hope the new owners of the property will keep the current business operating."

According to Gerry, the Nob Hill Theatre is a "successful, cash flow-positive" business. A new owner might also want to develop condominiums or apartments above the business, said Gerry.

"We've been told by city officials that the property has potential for development," he said.

The property, built in 1911, is 3,272 square feet, according to tax records, said Gerry. It consists of a 50-seat theater, 20 video booths (including two suites) a maze area, two private dancer rooms, and a private pole dance lounge. A one-bedroom apartment located behind the theater was featured in the January 1982 issue of Architectural Digest. The current owners of the theater now live there, said Gerry, but plan to move after the sale.

As it is currently operated, customers pay between $20-$30 for all day privileges to watch movies, which play continuously, and live shows, which take place in the afternoon and evening. There is no additional charge to watch videos in the downstairs arcade.

In the 1950s, the theater, then called Club Hangover, showed foreign films, said Gerry. At one point, it was owned by baseball star Joe DiMaggio and a photo in the lobby of the theater shows Louis Armstrong playing there, said Gerry.

"There is quite a history here," he said.

The current owners have made "many improvements" in the property since they took over, said Gerry, who described the property as "immaculate."

"But only time will tell whether the new owner will want to continue the business as is," he added. Gerry estimated the sale could take up to three months, typical for the longer sales cycle in commercial properties.

A former dancer at the club, Matt Converse, said he "loved" the five years he spent working there in the 1990s.

"It was probably the most fun I've ever had at a job," Converse said in a telephone interview with the Bay Area Reporter. Converse said he retired as a dancer to return to his career as a writer.

Converse wrote about his years at the Nob Hill in two recently published books, "Strip Shot," which was the #1 LGBT horror bestseller on Amazon.com and "Behind the Velvet Curtain," about a stripper stalked by an obsessed fan.

Then working at a bank, Converse said the idea was "intriguing" so he "went home, practiced dancing for a few weeks, and came back and applied for a job." At the time, the application process included participating in an amateur night, dancing for an audience who voted for each contestant. Converse came in first and was offered a job on the spot, he said.

"I took it the whole thing very seriously," he said. Paid $30, plus tips, for a 22-minute on-stage dance, Converse kept his day job for a while, then worked full-time as a stripper before returning to writing.

"It was a great experience," he said. Especially rewarding, he said, were letters he received from two patrons, one who said he had been impotent until he saw Converse dancing and another who said seeing the show made him realize he was gay.

"It will be very sad if the new owners decide not to continue as a strip club," Converse said. "There is nothing else like it anywhere. It would mean the end of an era."