Medium in the middle 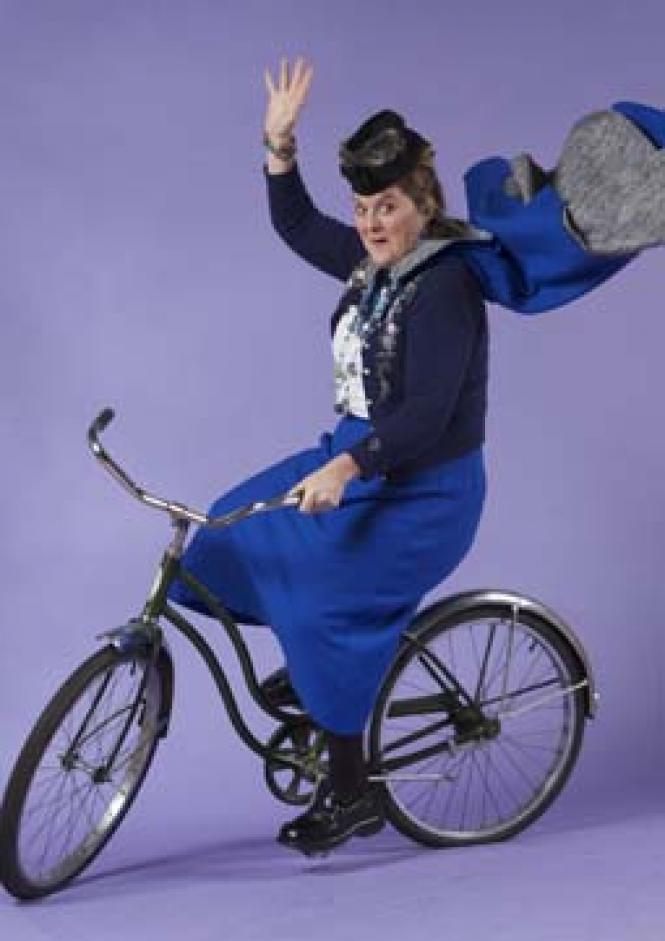 Megan Cavanagh began her movie career in major-league fashion, playing Marla Hooch, a shy heavy-hitter with saucer eyes in A League of Their Own. That she knew how to hit a ball helped her land the role in the 1992 film about professional women's baseball during World War II. That she is an avid bicyclist, however, didn't help her capture the role of the cycling medium Madame Arcati in High Spirits, a character who even has a ditty titled "The Bicycle Song" that had Beatrice Lillie and her acolytes peddling around the stage in the original 1964 Broadway production.

But because High Spirits is a production from 42nd Street Moon, which specializes in staged concerts of seldom-seen musicals, chairs have been substituted for bicycles. "But the choreography is really cute," Cavanagh said, "and I'm definitely getting a workout."

This is Cavanagh's second show for 42nd Street Moon – she previously played a Hedda Hopper-type gossip columnist in Out of This World – and she has invitations out to the casting directors from some of the area's big theaters, hoping to get their notice. After working in film and television in Los Angeles for 20 years, she and partner Anne Chamberlain moved to the Bay Area two and a half years ago for family reasons. Somewhat unusual family reasons.

"I was married at one time, and we had a son. And then my ex-husband and his wife had a little girl, and they wanted to move up here. So they asked if Anne and I would consider moving too, so my son could grow up with his little sister, and we ended up living next door to each other in two apartments in Palo Alto, and my son's bedroom connects to both apartments. A door goes into our apartment and a door goes through a closet into his dad's apartment, which makes me laugh."

Her son is 16, and after he heads off to college, Cavanagh and her partner will rethink the situation. "But I love it up here and I don't love LA, and my ex-husband and his wife, who's pregnant again, want us to stay. We're like the aunties next door, and they even threw us a backyard party after Anne and I got married in August."

Cavanagh is one of the stars of Exes & Ohs, a Logo cable comedy about lesbians both coupled and looking to be that way, which will begin airing its second season this summer. "I'm so excited that I'm working as a gay woman on a gay show."

Ironically, Cavanagh, 48, came out less than 10 years ago. "I knew in my late 20s that I was attracted to women, but I was completely in denial about it," she said. "I had wanted to be the greatest child ever in my parents' eyes, and I realized I was OK and didn't need to do that. There was a lot of therapy, and being in a goddess group really helped. There are a lot of dykes in my goddess group, and every person I wanted to hang out with was a dyke. I thought, hello?"

Her experiences in the goddess group are finding their way into her interpretation of Madame Arcati, an eccentric medium who inadvertently summons up the spirit of an English gentleman's late wife, both to his and his current wife's considerable consternation, in the musical adaptation of Noel Coward's Blithe Spirit. "I'm incorporating some of the things we do in our rituals, not things that the audience are going to know, but I'm doing it for me."

Cavanagh said she's also channeling some of Ruth Gordon's joie de vivre in Harold and Maude, and bringing in a bit of the cartoon character she voices in the Nickelodeon series The Mighty B! "I play Amy Poehler's mom, a woman named Hillary Higgenbottom, and she's this fantastic, boot-wearing, dreadlocked, tattooed, Harley-riding mama who is clearly a dyke. When I started Madame Arcati, I was thinking she's a little Hillary to me. I know that sounds like a stretch, but they're similar beings."

Living in the Bay Area, Cavanagh figures she is close enough to LA to get to jobs and auditions in short order. "I have 66,000 miles on my car, and it's just two years old," she said. "I have an established career, and granted, I'm not an A-list actor, but the people down there know about me. I just felt I can't wait in LA waiting for the phone to ring. I wanted to live my frickin' life."

And did she worry about the career ramifications when she first came out? "I did," Cavanagh said, "but I'm so happy in my life and I feel like I'm a better human being because I'm being my authentic self that I don't care anymore. Now I feel like I have the best of all worlds."

In my review last week of Daniel MacIvor's A Beautiful View at Theatre Rhino, the implication may have been drawn that director Cristina Alicea somehow changed the author's script in her stated effort to find new ways of presenting his words. After the review appeared, Rhino Artistic Director John Fisher called to say that an important sound cue in support of both the letter and spirit of the script was in fact present on opening night, while acknowledging that its volume had been lowered after several preview performances. The agency in charge of licensing the play had expressed concern to Fisher that the text had been altered, which was not the case – and not what my review actually said. But now it's all crystal clear.

Richard Dodds can be reached at BARstage@comcast.net.