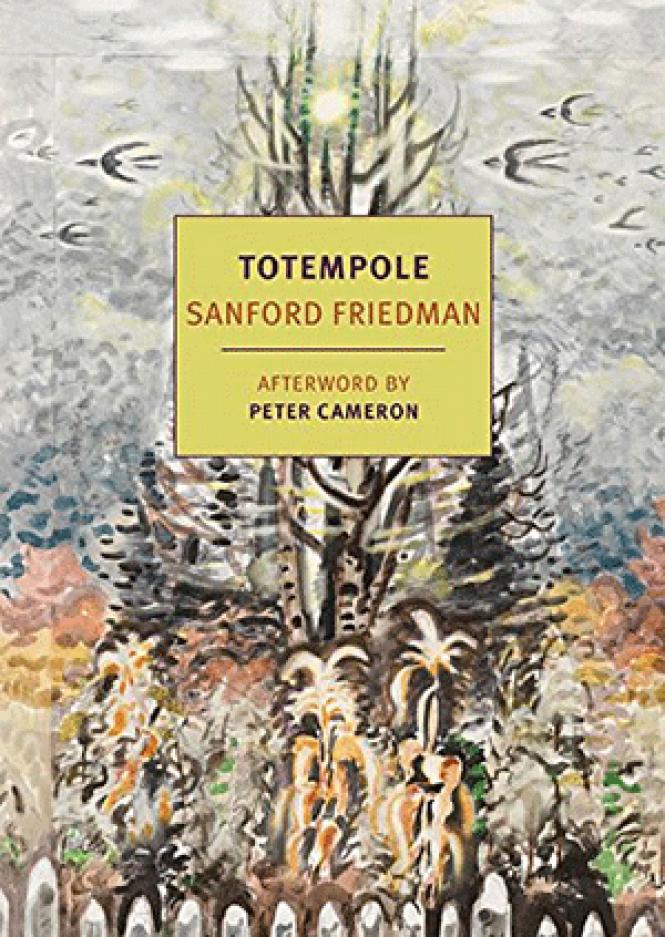 If I were Tim Cook rather than Tim Pfaff, I'd consider having Apple pick up the tab â€" and actually pay the publisher â€" for anyone who wanted to download the iBook of Sanford Friedman's Totempole to support the gay novel's tenuous new existence in the brave new world of the e-book. Call it putting your money where your mouth is. New York Review of Books has just taken the trouble to republish, also in a hold-in-both-hands paper book, Totempole (which, BTW, first appeared in 1965, five years after Cook did) alongside its first-ever publication of Conversations with Beethoven, a brilliant piece of speculative biographical fiction and the final novel by Friedman, who died in 2010 and is in considerable danger of falling again back into criminally underserved obscurity. Go Tim.

In the gay-fiction genre, Totempole is to The Lord Won't Mind what The Scarlet Letter is to Peyton Place . Why its reappearance in 2014 comes as such a surprise is anybody's guess. It was published twice in Friedman's lifetime, and one of its chapters, "Ocean," won an O. Henry Award. Reviews were mixed, at the predictable extremes, and the novel slipped back into the dim world of "cult" fiction. While it's by no means a first in terms of a gay writer's giving center stage to a gay character in fiction, it stands nearly alone in its unblinking view, from the inside, of a homosexual man coming of age in post-WWII America. And much of it is far more universal than that.

Even such canonical gay classics as Gore Vidal's The City and the Pillar and James Baldwin's Giovanni's Room â€" toss in Edmund White's comparatively more close-to-the-bone A Boy's Own Story â€" can seem like literary dances of the seven veils compared to the stuff of gay life on which Friedman shines a light. Early â€" earliest-memory early â€" childhood fascination with Daddy's ding-dong. The erection-inducing stuff that clings to nearly every aspect of swimming in public places. The scouring of dictionaries and textbooks for explanations of (even references to) all the aspects of sex you have names for. The discovery of masturbation and the primal fear caused by being told it causes insanity. The camp counselor: "Uncle Hank," who's 19. (I never even went to camp per se, and I can entertain the complete panopticon of the American camp-counselor fantasy.) The first milky ejaculate. The first case of crabs. The beloved college roommate spurned out of fear of personal exposure. The stare-at-your-shoes, red-faced purchase of Trojans at the pharmacy. I Hear America Singing.

Beware only one thing in the promo materials, which suggest that the novel climaxes with the protagonist Stephen Wolfe's soldierly wartime romance with a North Korean in the last century's most-forgotten war. It's there, it's climactic, and it's worth the wait, but in a discomfiting reflection of the countercurrents of real life, you don't know it's romance until halfway through the novel's novella-length final chapter, "Rats." Before it come the experiences, with their totemic animals, of "Kleine" (he's Jewish, with parents you won't soon forget), Stevie, Stephen, Steve, Corporal, Teacher, each illuminated with age-appropriate language.

Self-identified as an actor from his earliest days at camp, when the pre-drag allure of the roar of the greasepaint and the smell of the crowd first excite him, "Stephen soon discovered that actors were granted license â€" exceptional social license â€" forbidden to ordinary human beings," Friedman writes. The book's trajectory takes him from being a shadow puppet in his own life story to a bona fide "actor," in the non-dramatic sense, in his real life.

Along the way, the outsider identity â€" as least as long as it's necessary â€" is limned in minute detail. Perhaps some gay San Franciscans, only too happy to celebrate the Giants, will recognize this: "For Stephen baseball was not a game, it was a tribal initiation. Ever since he could remember, every autumn there was an unofficial national holiday that would last as long as a week sometimes during which every adult male, including the President, suspended work and went or listened to the World Series. But somehow, despite all this, Stephen was afraid of baseballs, afraid of being hit. To Stephen the crack of the bat connecting with a ball was as overwhelming as a crack of lightning, and consequently he always struck out."

Friedman doesn't soft-pedal the crises of growing up gay, even throwing in a dash of transitory Kierkegaardian religious refuge-conversion along the way. But neither is Stephen martyred for the cause of being gay, or for that matter particularly shamed by his world, which, like the reader, is continually won over by his essential goodness.

Rice queens, though, would do well to bring canisters of oxygen for the ascent of that final episode, "Rats." The suspense-riddled saga of Stephen's necessarily clandestine romance with the widower Sun Bo causes frequent holdings of breath, but nothing else is quite so devastating, initially at least, as the revelation, largely by the North Korean prisoner-of-war doctor, of the cultural divide that separates them more decisively than the fences do.

But even that does not spell doom. At the literal climax of their final episode of love-making, Friedman â€" whose writing about sex never makes you wish he hadn't â€" writes that Stephen "laughed and laughed and went on laughing, and as he did he suddenly remembered the myth of Zarathustra, about whom it was said that when he was born, instead of crying, he burst into laughter. Stephen had never fully understood the myth before, but now he did â€" now, in the midst of his ecstatic joy, he realized he was being born."

It won't come as a spoiler to note that, in the book's final paragraph, Stephen, coming home, sees "the underspanning of the Golden Gate Bridge."