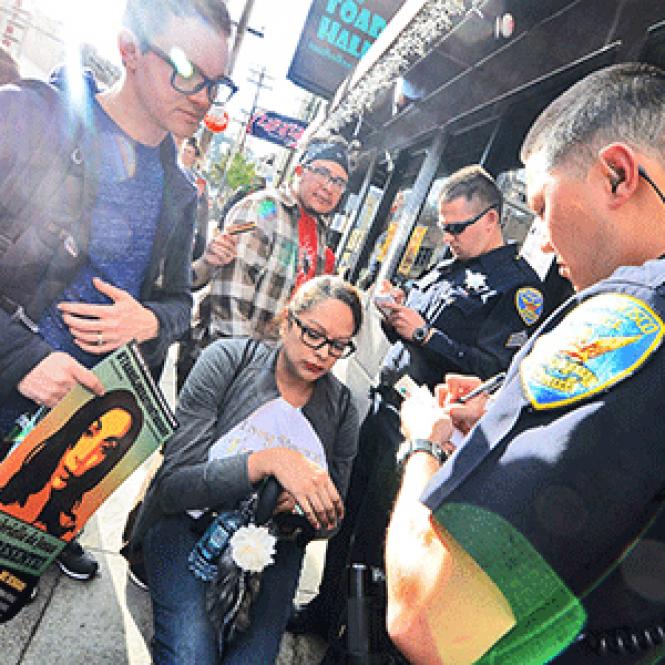 San Francisco Police Officer C. Stokes, right, takes a report from Danielle Castro, seated center, who said she was battered by an employee of Toad Hall as he was trying to close the door to the bar  (Source:Rick Gerharter)

A rally in the Castro to affirm and celebrate black LGBTQs briefly turned ugly when some of the demonstrators went to a bar and said they were met with hostility.

Organizers with Queer #BlackLivesMatter held the February 28 rally to mark the end of Black History Month and call attention to violence against trans women of color. One of those women, Taja DeJesus, was stabbed to death in San Francisco's Bayview neighborhood last month.
Participants in the Queer #BlackLivesMatter rally gathered at Jane Warner Plaza; later some of them went to Toad Hall bar. Photo: Khaled Sayed

The rally, which started at Jane Warner Plaza at Castro and Market streets at 2 p.m., was mostly peaceful, and the crowd enjoyed music by Bayard Rustin Coalition members and a performance by drag queen Bebe Sweetbriar.

Afterward, some of the participants decided to pay a visit to Toad Hall bar, 4146 18th Street. They said they were met with hostility and were asked to leave. A similar experience occurred there in December during a Queer #BlackLivesMatter rally.

"We demonstrated in front of Toad Hall for 10 minutes, until one of the establishment employees allegedly assaulted one of our trans participants," said Bayard Rustin Coalition member Shaun Haines.

The victim of the alleged assault was later identified by organizers as Danielle Castro.

"The demonstration remained peaceful," Haines said. "Our organizers dispersed the majority of the crowd, leaving behind legal counsel and other concerned citizens and organizers to assist the woman."

The Trans Activists for Justice and Accountability Coalition put out a statement on its Facebook page about the alleged assault.

"Danielle Castro, one of the leaders of TAJA's coalition and a disabled trans woman of color, was assaulted and battered by the manager at Toad Hall at an action," the statement read. "This is highly ironic as we were there to protest racism in the Castro and violence against trans women of color."

Before it was renamed Toad Hall several years ago, the bar had long been known as the Pendulum and catered to the African American community.

San Francisco Police Department spokeswoman Officer Grace Gatpandan said this week that officers were dispatched to the bar in response to an assault call and both parties were there.

"However, the victim didn't want to press charges," Gatpandan said.

According to the police report, there were six or seven witnesses, but police couldn't arrest the alleged perpetrator because the victim declined to press charges, Gatpandan explained.

Castro posted her own statement on Facebook following the incident.

"Being violently pushed by my own community in the Castro while protesting peacefully because transphobia is killing us is unacceptable," Castro said. "I was assaulted by the manager of the Toad Hall and then harassed by SFPD. The protesters paid very little attention to the violence I was experiencing even though that was the reason for the protest."

In a follow-up message, Castro said that she hasn't decided whether to press charges.

Castro said that she was shoved by the Toad Hall manager who was yelling profanities at her and telling her, "bartender lives matter too."

"Toad Hall's manager came from behind me and shoved me to force me to move," Castro continued. "The police showed up because they were called to the scene. I wanted to file a police report but they told me that I don't live in this neighborhood and I should file a police report in another police station near where I live. The police sided with the bar manager without listening to the witnesses who saw the manager assaulting me."

Toad Hall employees did not respond to a request for comment.

During the rally, which attracted about 100 people, speakers talked about the absence of black queer and trans people of color in the Castro.

Sweetbriar, who performs at some of the bars in the Castro, said that sometimes she is the only black person in the room, and that is happening more often.

Darin Conley, who helped organize the event, said he feels that queer and trans people of color have been overlooked and absent.

"We wanted to call the Castro out," Conley said. "I contacted a few organizations, and the Harvey Milk LGBT Democratic Club really stepped up, among many other organizations, such as the Bayard Rustin Coalition, to help us in taking an idea and making it a reality. Today we wanted to have our community here and celebrate black lives and black queers and trans lives that do matter, and we need to talk about how to make them matter more in the Castro."

The Alice B. Toklas LGBT Democratic Club also had members at the rally.

"I think that our community isn't white, gay and middle class only," he added. "Our community has many homeless and transgender people, and people of color, and bisexuals, lesbians, and others that we need to include, and that is why we are here today."

"I'm here in solidarity. Whether I'm the sheriff or not, I would be here with you because this is my politics," Mirkarimi said. "In the 31 years I've lived here in San Francisco, I have never seen the city change as it has in the past three years. I have affiliated myself out of solidarity with the Black Lives Matter movement and rally, especially in response to what happened in Ferguson, Staten Island, Cleveland, and what has happened here in our very own backyard."

He was referring to the killings last year of two unarmed black men in Ferguson, Missouri and Staten Island, New York and the failure by grand juries in those cities to indict the white police officers who killed them. Additionally, 12-year-old Tamir Rice, who was African American, was killed by a white police officer in Cleveland last November. He had been playing with a pellet gun.